Macheda: I now hope I stay in the Premier League

Will he get any playing time next season?

After Federico had a poor loan spell in Serie A for part of last season, he now takes his place back in the United squad and he hopes to be able to secure himself some playing time in the campaign for our 20th league title:

“I really wanted to have an experience in Italy but I now hope to stay in the Premier League. For a youngster, England is a better place to play. It wasn’t easy from a psychological point of view to leave United and join a Sampdoria side who were fighting relegation. It was a delicate situation.” 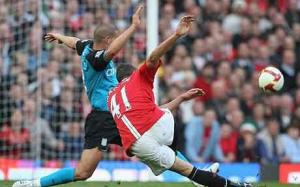 It truly was a great finish from the youngster

Federico Macheda had a meteoric rise in the hearts of the fans when he scored what was a goal of the season contender to complete a 3-2 turnaround against Aston Villa that kept United in a thrilling title race. As if written in the stars, he also scored another winner in the next match from the bench and United fans instantly thought that SAF had uncovered the new Ole Gunnar Solskjaer ‘Supersub’. Since then, unfortunately, he has fallen from grace at Old Trafford and SAF sent him out on loan to a struggling Sampdoria side in Serie A but he now returns to the United squad and Reserves boss Warren Joyce hopes that he has taken the positives out of the experience and will return a more experienced and mature professional:

“Sometimes you learn about yourself even when things don’t go well. Federico’s had to dig deep and only time will tell. It’s now all about how he comes back to United and responds to the challenge.”

For me, I think Macheda sits firmly down the pecking order of strikers at Old Trafford this season. With Rooney/Hernandez/Berbatov/Owen all fighting for the starting places and Welbeck also returning from what was a good loan spell at Sunderland, Macheda will have to fight for his place in the squad. This should be his make or break season for United but if he capitalises on the fans that he gained during his purple patch at the start of his United career, he could well turn into a future fan’s favourite.