The Manchester derby, tipped as the biggest derby ever by both Sir Alex Fergusson and Roberto Mancini, and also by the glorious British press!! This last week has been hell for me. The build up to the derby started as soon as the final whistle blew in the rather infuriating 4-4 draw with Everton, in which was stated Manchester United threw the league title away and City were now the favourites.

I had never heard such rubbish in my life. United threw the game away but it only merely opened the door for City as they were still 3 points behind with 3 games to go. 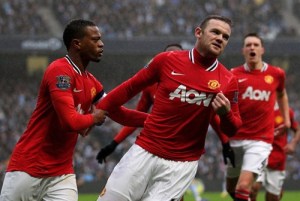 I have been confident all week and still am. The squad know what the fans expect and what Sir Alex expects from them. A win will effectively kill off City’s challenge this season, a draw would see us needing a win against Swansea and at least a draw at Sunderland to secure the title and a loss would mean 2 wins would be necessary for United and City would need to slip up at least once against either Newcastle or Queens Park Rangers.

The ball clearly lies in United’s court and the glorious 20th league title is theirs to win or lose. I expect a match similar to the one played at the Etihad in January in the FA Cup. United will be fired up and so will City!

I think Antonio Valencia and Nani will be the main problem causers for City and David Silva will be the problem for United.  I am sure our back 4 should have learnt from their mistakes against Everton and I hope they hit the ground running.  Whether Rafael will play RB or not is another story. We might see Chris Smalling at RB with Rio Ferdinand and Jonny Evans as CB’s with Evra at LB, who knows, apart from Sir Alex anyway!

Here’s to a great result for United tomorrow night, resulting with them 6 points clear with 2 games to go, it would certainly make my week and yours most probably!!