Vanja Milinkovic has been in Manchester for the last week training at Carrington for the first time since being signed in the summer.

The 17-year-old goalkeeper is yet to play for United because he was immediately sent back on loan to FC Vojvodina in Serbia, so not much is known about him and how he has got on this season.

To offer our readers some insight into Milinkovic, we had a chat with a keen follower of Serbian football to hear how he is getting on.

Please introduce yourself to The Peoples Person readers.

Hey guys, my name is Milos. I’ve been following Serbian football my whole life and am very passionate about it.

Manchester United signed Vanja Milinkovic in the summer before loaning him back to FC Vojvodina in Serbia. What can you tell us about the 17-year-old goalkeeper?

Well first of all he is very tall at 6″7″ and has all the physical tools that he needs to become a great goalkeeper. He is only 17 but looking at him you’d guess that he was at least 25, he is a real physical specimen. He is a very hardworking kid from a strong sports family. His brother Sergej is also a big talent who currently plays in Belgium and for Serbia U21s. 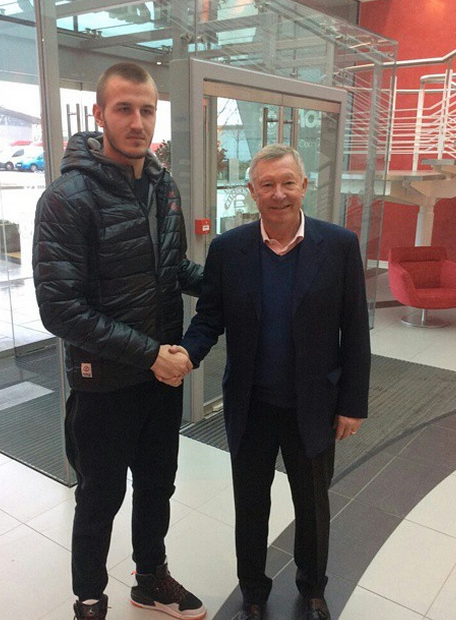 How has Milinkovic played this season back with Vojvodina?

He has started all 15 of FK Vojvodina’s Serbian League matches this season and leads the club in appearances. He’s only 17 and playing his first season against senior players, so it’s been a bit of an adjustment for him as you can imagine. There aren’t many teenage goalkeepers starting for their clubs.

He has made mistakes and really needs to work on his decision making and positioning in goal but he’s also had some stand-out performances and key saves. His reflexes are very good and he is a good shot stopper. He just needs to work on some fundamental skills and make smarter decisions but that should come with age.

He is very tall at 6″7. Does he command his box and take crosses comfortably?

Yes he is very comfortable in the air and easily soars above opponents to get to a ball. A few times though he has come out too early but he should fix that with more experience.

What have the local press and fans in Serbia been saying about his performances?

The press considers him a big talent but most agree that the only reason he’s playing every minute is because of a clause in the transfer agreement which pays FK Vojvodina €10,000 for every start that he makes while on loan. The clubs fans are split on him, some want a more experienced keeper that will make less mistakes to start ahead of him while others really like him and understand that he will have growing pains and is still learning.

He has made mistakes and really needs to work on his decision making and positioning in goal but he’s also had some stand-out performances and key saves.

If you could compare him to another goalkeeper in world football, who would it be and why?

Do you think Milinkovic has what it takes to get into Man United’s first team?

In the next few years? No, I don’t think so. He is still very raw and has to develop more but his potential is huge and he has all the tools that are needed to make a great keeper. I think he will one day be good enough for Manchester United but he has to keep working hard to get there.

Are there any other talents in Serbia who Man United should be interested in signing?

Of course, Serbia are the current U19 European champions and have many up and coming talents to keep an eye on. Striker Aleksandar Mitrovic, defender Milos Veljovic, winger Filip Kostic and midfielders Nemanja Maksimovic and Mijat Gacinovic are just a few of the notable ones.