How Man United could line-up after signing Kevin Strootman

With all the rumours circulating about Kevin Strootman joining Man United either in January or the summer, we decided to take a look at what a potential starting XI could be with the Dutch midfielder in the side.

First and foremost, signing Strootman could see Louis van Gaal‘s traditional 4-3-3 formation come to the fore. Strootman is a player Van Gaal admires and one who, like Daley Blind, deeply understands his philosophy. With both of them in midfield, Van Gaal would be more than confident reverting to his favourite formation.

Strootman would more than likely join United as a box-to-box player rather than a deep lying defensive minded midfielder, something which would compliment Blind or Carrick well. Having him and Ander Herrera in midfield would give United an amazing amount of energy and drive.

Up front is where the main question mark lies with this formation as it sees Wayne Rooney forced out to the right wing to accommodate Robin van Persie up top.

Angel di Maria would naturally drift in so that wouldn’t be too much of a problem and he’d be able to link-up well with Luke Shaw but would Van Gaal push his captain out wide? 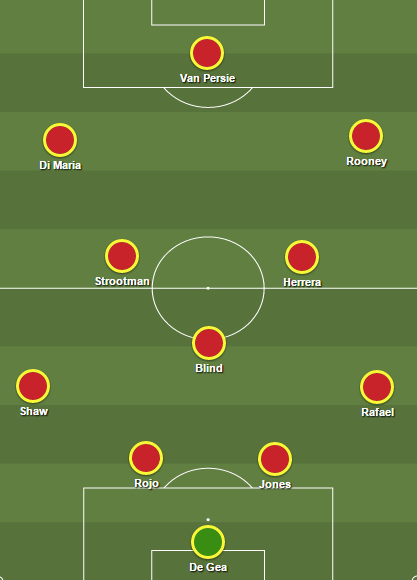 What formation would you choose if Man United signed Strootman?