Kevin Strootman has been heavily linked with a move to Manchester United ever since Louis van Gaal took over as manager and with the January transfer window fast approaching, reports have continued to gather pace.

With that in mind, we got the opportunity to speak to ESPN’s Roma blogger Julian De Martinis to have a detailed chat about everything to do with Strootman.

From discussing his relationship with the fans and press to taking a look at how he has got on since returning from injury, Julian offers some great insight into the full story.

This is a 2-part interview and we will be releasing the second part at 3pm GMT today.

Hi Julian. Please introduce yourself to the readers.

Hi Sam. My name’s Julian De Martinis and I’m ESPNFC’s Roma blogger, for those who may not know me. I’ve been writing about calcio for quite some time now and feature regularly on Goal.com as well as having written for TheOffside and the Italy WorldCupBlog a few years ago. Needless to say, I’m a diehard Romanista.

Kevin Strootman is being linked with a move away from Roma. Reports are continuing to gather pace and will only get stronger in January. Do you think he will be a Roma player when the January transfer window shuts?

I think he might though this sport doesn’t really lend itself to certainties anymore, does it? Roma seem to genuinely want to keep their superstars now, after a few years of selling big talents to make up for the debt left over by the Sensi regime as well as to supplement lost income flow due to not participating in the Champions’ League.

“More than if Roma need the money, Strootman’s desires will be massive in seeing if he stays at Roma or not.”

However, president James Pallotta is adamant that the club’s finances are in order and there simply is no need to sell. He maintained that all throughout the summer, which ended of course with the sale of Mehdi Benatia. In the case of the centre-back, issues over a supposedly promised renewal and new salary hit the breaking point, with Pallotta even releasing an official statement on the club website to explain that he sanctioned a move because the situation with the player become “poisoned” as he effectively forced a move out.

Despite Benatia’s admitting the club needed the money, it seems that the real lesson here was that players have more power than ever. More than if Roma need the money, Strootman’s desires will be massive in seeing if he stays at Roma or not.

That being said, it gets complicated there rather quickly. His agent repeatedly stated last year that Kevin was more than happy to be at Roma and did not want to leave. However, the links to Manchester United are obvious, chief amongst which would be a reunion with former national team coach Luis Van Gaal, who rated Strootman so highly that he said before his injury last spring that he was one of only three players guaranteed to be going to the World Cup. It’s that very same injury which further makes things murky, because Roma would likely only let him go for a very high fee and Manchester United would find themselves with a second very expensive player in their squad who’s not yet fully recovered from a major knee injury. 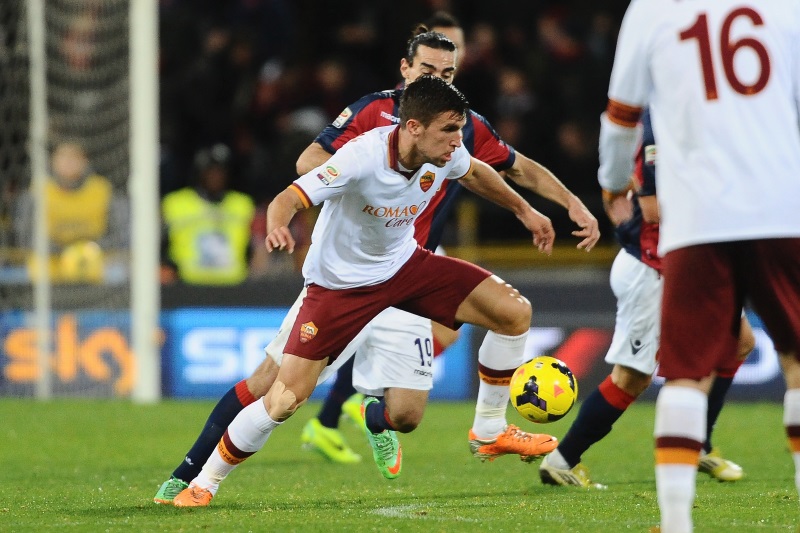 Obviously the main concern with Strootman for both Roma and any potential buyer is his knee. How has he played since returning from injury? Are the fans happy to have him back?

The fans couldn’t be happier to have their midfield general back. Strootman was one of the faces of Rudi Garcia’s Roma side before his injury, perfectly balancing the midfield with Daniele De Rossi and Miralem Pjanic. He didn’t score often but they were often vital when he did, including a last minute equaliser against Atalanta a year ago, a penalty against Milan, an effort against Napoli and the opener against Torino which of course finished in a draw that ended the side’s historic 10-match winning run to begin the season.

“His grinta and mentality were simply everything the side needed after years of underachieving and his injury was a massive blow to a fanbase that quickly embraced him as a leader on the pitch.”

Since returning from injury, his time has been severely limited. He came on for the last five minutes of Roma’s 3-0 win over Torino on November 9th. He was an unused substitute in the following match on Nov 22 against Atalanta before coming on for the last seven minutes against CSKA Moscow in a game that Roma drew at the death. With less than a minute left, he and Juan Iturbe failed to combine on what could’ve been a routine counter and he lost possession that ultimately led to the equaliser. While hardly his fault entirely, he appeared rusty as would be expected for a player out as long as he was and some questions were raised by Garcia’s substitution in such a critical match.

After that, he didn’t play at all against Inter at the end of November but made his first start since the injury against Sassuolo. It was the first time that Roma were able to field their first choice midfield trio since he was hurt but it was very evident that the strong cohesion they had formed simply wasn’t there. He completed just 74% of his passes that day, according to Squawka, and only attempted two tackles, neither of which were successful. Both stats were anomalous for a player who was so often tidy in possession and useful when the side did not have the ball, either. Since then, Roma have played two matches – against Manchester City in the Champions’ League and last weekend’s win over Genoa – and he hasn’t made it off the bench.

“Walter Sabatini has done a fantastic job to ensure that the centre of the pitch hasn’t missed Kevin Strootman too much.”

How much of a difference do you think Strootman’s return will make to Roma’s season?

Roma are actually very well stocked in the midfield; since his injury, De Rossi has arguably declined but Radja Nainggolan has risen to immense heights and Seydou Kieta has rarely put a foot wrong. Walter Sabatini has done a fantastic job to ensure that the centre of the pitch hasn’t missed his impact too much, ensuring that he can slowly be re-integrated back into the team without rushing and potential re-aggravating his injury. That being said, he is a fan favourite and so fantastic when in-form that his appearance on the pitch could really raise the spirits of the team.

Part 2 of our interview with Julian will be published at 3pm GMT where we discuss whether Strootman is irreplaceable for Roma and if he would force a move to Man United.