Kevin Strootman’s future: Part 2 – Being replaced, forcing a move and how he could improve Man United

Part 1 of our interview with ESPN’s Roma blogger Julian De Martinis about Kevin Strootman took a look at how he has got on since returning from injury and his relationship with Roma’s fans.

In part 2, we discuss whether Strootman is irreplaceable for Roma and whether or not the Dutch midfielder is likely to force a move away from the Italian side to join Van Gaal.

How important is Strootman to Roma? Is he irreplaceable or do Roma have somebody who could potentially step into that role if he were to leave?

He’s vital in terms of being a true face to this team but the midfield is well covered by Pjanic, De Rossi, Nainggolan, Keita and even Salih Ucan. More importantly from the club’s perspective, Strootman wasn’t cheap. He cost Roma nearly €20m after add-ons and they certainly would not want to sell him for a loss but his injury has surely only deflated his market value.

However, there’s simply no doubt that Rudi Garcia as well as the rest of Roma’s hierarchy see Strootman as a valuable piece of the club’s future and would be massively reluctant to part with him. Instead, the focus is on re-integrating him back into the team to get him into the form he used to be in.

Are there any stories emerging from Strootman’s camp which suggest he is interested in a January or summer move or do you think he is dedicated to Roma for the foreseeable future?

Strootman himself always seems dedicated to Roma, often tweeting about the club’s next match and spurring the team on after victories. After Roma drew Feyenoord in the Europa League, he said on his Facebook page that he “couldn’t wait” for the match, suggesting at the very least that he seems himself in a Roma jersey after the January transfer window closes.

Most of the rumours on a potential move seem to be coming from the English media and although the Italian media echoes this at times, the player himself has never publicly stated anything about leaving the club in the immediate future (as far as I’m aware). Many of his tweets, in fact, are about getting back into shape so he can help Roma.

“At the end of the day it’ll come down to the player’s desires which may just depend on how well Roma and Manchester United end the season. If one of the clubs fails to make the Champions’ League, the entire debate may become a moot point.”

If Man United want to sign Strootman and Roma make it very difficult, do you think Strootman would force a move through like Marcos Rojo did at Sporting Lisbon last summer?

As stated above, anything is possible in this sport but at this current point in time, Strootman does genuinely seem to care about Roma and looks to be mainly focused on getting back into shape. If he does try to force a move this summer, it’ll be interesting to see how the Roma hierarchy react. They may reluctantly sell like they did with Benatia but it was well-known for some time that the centre-back had contract disputes with the club and there really aren’t the same kind of rumblings with Strootman.

In any case, he won’t come cheap to Manchester United, though the English club has shown this summer that they’re not really afraid to spend. At the end of the day it’ll come down to the player’s desires which may just depend on how well Roma and Manchester United end the season. If one of the clubs fails to make the Champions’ League, the entire debate may become a moot point. 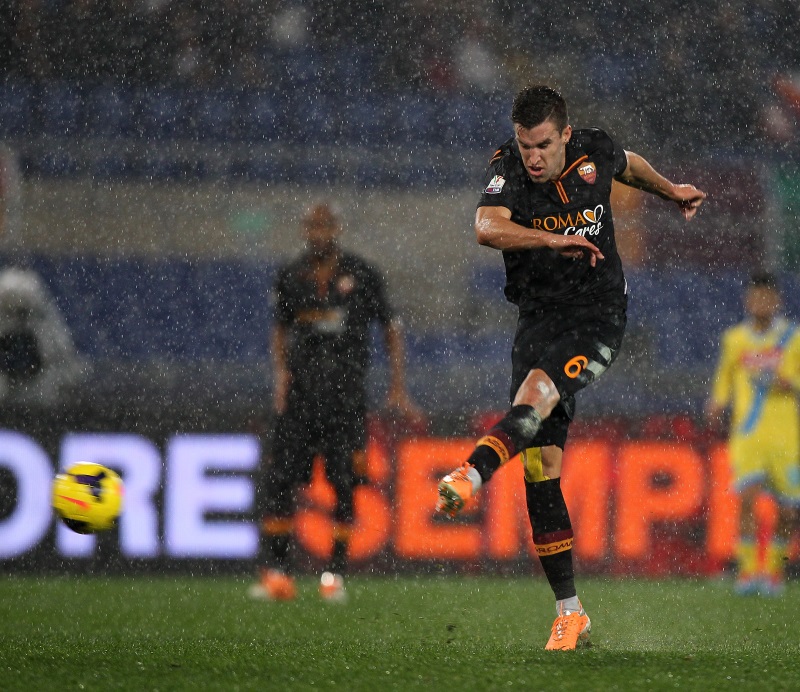 How do you view Roma’s chances this season in the title race?

The club have looked much more vulnerable than they did last season and are paradoxically closer to the top than they were at the same point last season, having taken more points from the corresponding fixtures one year ago. There’s no doubt that the Champions League has taken its toll on the side but the increase in matches has coincided with one of the worst injury stretches in recent memory for the club.

Not only has Strootman missed most of the season so far but starting centre-back Leandro Castan played 45 minutes before being ruled out for possibly the entire season with a cavernoma. Douglas Maicon seems constantly on the verge of injury, Federico Balzaretti may never play football again, Mapou Yanga-Mbiwa and Davide Astori have both missed extended periods with injuries and Juan Iturbe started the season well, got injured, and is now slowly finding his form again.

The title race looks to be a very close one this season, with Roma seemingly capable of pushing Juventus all the way and it is somewhat encouraging that the side have stayed so close to the leaders despite all the absences.

What are your thoughts on Garcia’s comments on Juventus over the last two seasons?

For the most part, Garcia did well to avoid talking about the referees at all last season. He’s largely stuck by that this season, although just a few days ago he said that Roma were behind Juventus only due to “illegal” goals, referring to the very controversial calls that took place when the two sides met earlier this season. Of course, his words were twisted and highlighted by the media as he was making a bigger and broader point, but in general the Frenchman is quick to praise his team when they do right and isn’t afraid to accept criticism and/or praise opponents when they do wrong.

“I think there’s no doubt that a fully fit Strootman would be a guaranteed starter and add some much need stability to the middle of the pitch.

To finish, how much do you think Strootman would improve Man United and where would he slot into the team?

I haven’t watched quite as much Manchester United as I’m sure many of your readers have, but I think there’s no doubt that a fully fit Strootman would be a guaranteed starter and add some much need stability to the middle of the pitch. His defensive awareness would relieve some pressure on the defence and in general it’s hard to think of many genuine midfielders that the side currently have that are better than Kevin can be.

As ever, most are waiting anxiously to see if he can return to his old level following the injury; he has the mentality to do so, no question, but sometimes injuries have other things in mind. I wouldn’t be surprised if United decided to wait and see how he recovers, though since Van Gaal is a big fan anyway they may try to tempt Roma while his price is somewhat low.

They’ll have to pry him out of the grip of Pallotta. In any case, both sides have such strong desires to have the player with them that it seems to me this rumour won’t go to rest for quite some time.