Manchester United’s success when reverting to a diamond system with a flat back four against QPR on Saturday which lead to hope among fans that Louis van Gaal sticks with it against Cambridge United on Friday.

United face their second trip in as many rounds to lower league opposition and won’t be thrilled if the 3-5-2 system reappears.

The team once more struggled to create any meaningful opportunities at Loftus Road but scored just minutes after changing to a diamond system. Even against Yeovil in the third round, United struggled with three defenders on the pitch.

4-1-2-1-2 will give chances to two players who deserve starts, Ander Herrera and James Wilson. The young striker was excellent and got his first goal of the season against QPR whilst Herrera was the stand out player on the pitch in the third round.

It will also allow another game for Daley Blind to regain fitness in his proper position and hopefully a start for Falcao alongside Wilson. The Colombian looked threatening against QPR and Friday night could be the perfect opportunity to gain some confidence.

If Luke Shaw is fit enough to return he’ll get some much needed game time whilst it might be another chance for the likes of Rafael, Patrick McNair and Tyler Blackett to impress if called upon as well as a debut for Victor Valdes. 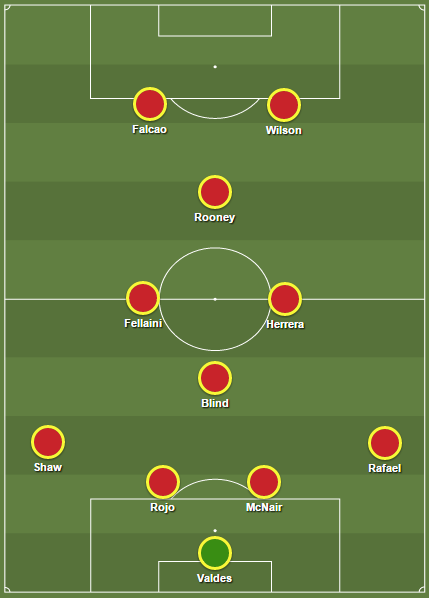