We’ve had a chat with Manchester Evening News football reporter Samuel Luckhurst for the latest interview brought to you by The Peoples Person.

Hi Samuel, thanks for talking to us. Could you tell the readers a little bit about yourself?

I finished university in 2010 and threw myself into an MA in journalism, since it was essential I needed specific qualifications rather than just an English and American literature BA. Since it was taught, rather than research, it was effectively three years’ worth of education crammed into one.

After I finished my MA in 2011 I got my first job as the Huffington Post UK’s sports reporter and editor before I joined the Manchester Evening News in October 2014.

It’s been well over a month into 2015 and Wayne Rooney‘s struggles look to have been caused by his presence in midfield. What do you make of Rooney’s form? Is it just a case of him playing the wrong position?

The simple answer is yes. It’s worth remembering his last days under Sir Alex Ferguson came in midfield and that led to him seeking clarification over his role in the team (which Sir Alex translated as a transfer request).

Rooney is unlikely to do that with Louis van Gaal. He got a new contract last season and is the captain, so he’s been pampered enough but he’s quite a delicate soul and won’t appreciate playing in an unfavoured position when the other strikers are toiling.

For club and country, he should either play up front or on the bench. He has strong competition at both levels but he knew what was coming in September when van Gaal said he was “not so satisfied” with Rooney as a striker.

That was a fair comment. Rooney was woeful against Swansea and Sunderland but United were struggling to function in a new formation and he arguably deserved more time as a no.9. He played a few games there when Radamel Falcao was injured and van Gaal just wasn’t convinced.

“Usually, though, Rooney resembles a Sunday league player attempting to mimic Paul Scholes and his lack of mobility has affected United’s fluency. His best seasons came with him finishing attacks, back when Antonio Valencia could cross a ball, rather than instigating them.”

Do you think him playing in midfield is just affecting him or is it causing problems within the entire team?

The entire team. Until the Burnley game, United looked unbalanced with him there although I thought he did a commendable job after Daley Blind went off.

Usually, though, Rooney resembles a Sunday league player attempting to mimic Paul Scholes and his lack of mobility has affected United’s fluency. His best seasons came with him finishing attacks, back when Antonio Valencia could cross a ball, rather than instigating them.

Rooney’s role has impacted Angel di Maria’s position and as a consequence plenty of reputable players look as confused as United did under David Moyes. Almost all of United’s attackers’ effect has diminished under van Gaal.

Gary Neville reckons Rooney could be as troublesome as Diego Costa up front (in which case why was he playing on the wing for England against Italy?) and plenty would agree. Rooney’s best seasons have come as a striker and he is still capable of harrying opponents, even though that fire in him has subsided over the years.

With Rooney playing deeper, Robin van Persie and Radamel Falcao have had a spell up top together but it’s not coming to fruition as of yet. Why do you think two highly clinical and experienced forwards can’t make it work together?

Falcao still looks ring-rusty and, worryingly for United fans, he reminds me of Diego Forlan; long-haired and willing but profligate. There was an occasion in the Burnley game when he made a terrific run and the ball was played backwards but his touch is as heavy as a Phil Jones pass and he looks taken aback by the pace in the Premier League.

A lot was made of his omission for the Southampton game, maybe too much, and he has not responded emphatically. The Leicester goal was a tap-in and he failed to convert good chances against QPR, Cambridge and West Ham. 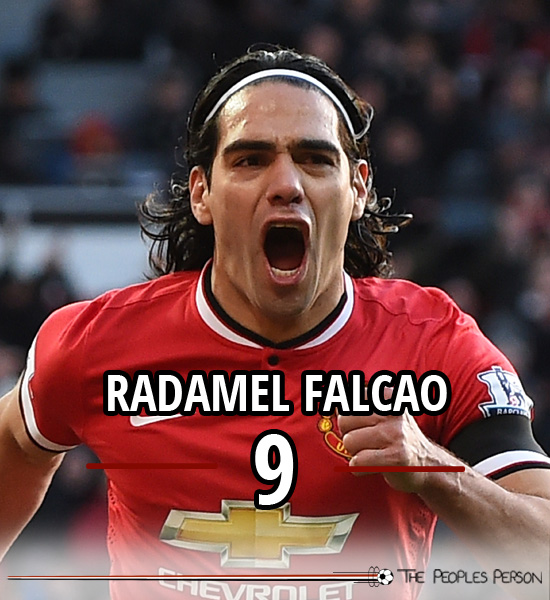 That said, his movement is impressive, unlike van Persie’s. Van Persie isn’t the player of two years ago and could easily have been dropped on a number of occasions this season. Van Gaal admitted he would have started on the bench against Hull in November but James Wilson was taken ill, van Persie scored and went on a mini scoring streak.

He’s finished more clinically than Falcao and that perhaps partly explains why van Gaal has so stubbornly retained him. As a duo, though, they lack alacrity and, crucially, pace, which is why Wilson has excelled as a substitute this season.

Van Persie has a better record beside Rooney than people think but plenty of supporters seem eager to see Rooney partner Falcao, or Rooney alongside Wilson. As a starter, though, Wilson has barely impressed.

Perhaps the most frustrating part of Louis Van Gaal’s tenure at Old Trafford is his refusal to play Ander Herrera when it seems like he’s just what they need right now. Is there any reason behind van Gaal’s chronic under use of the Spaniard?

Possibly, yes. But that’s all I’ll say about it.

David de Gea is a name I’m sure you’ve been asked about plenty of times in recent months, can United fans expect to see a resolution to his unnerving contract situation soon?

It looks like he will sign a new deal but, like with Cristiano Ronaldo, United fans should enjoy watching him while he’s still at the club. His girlfriend lives in Spain, he will (probably) have the chance to move back to his home city and play for one of the biggest clubs in the world. Playing Spanish football might even convince the blinkered Vicente del Bosque that De Gea is now a vastly superior goalkeeper than Iker Casillas.

Casillas, actually, once said “De Gea will retire us all” and that could prove to be true.

Two of the promising youth players in United’s first team squad this season, Tyler Blackett and Andreas Pereira are yet to commit their futures to the club, with both out of contract in the summer. Is the hold up in the deals coming more from the players or the club itself?

Van Gaal wants Blackett to commit but he effectively signed three left-backs in the summer which would suggest Blackett’s future is at centre-back, where he has never looked convincing. Paddy McNair has performed at centre-back and right-back and Van Gaal values versatility, which explains why he’s secured a new deal.

I was sceptical of Blackett at youth level and Birmingham fans booed him last season when he was on-loan there. His chance at United is more down to injuries and luck – Michael Keane and Tom Thorpe should feel aggrieved not to have the amount of appearances under their belt for United that McNair and Blackett have.

As for Pereira, I’m not convinced United are in a Pogba or Januzaj-style situation with him.

After beating Preston in the FA Cup this week, van Gaal’s men are considered the favourites in the competition which has seen Chelsea, Manchester City, Southampton and Spurs crash out already. Is the only realistic chance of silverware this season one that United can go on and win at Wembley?

Yes. Any chance United had of challenging for the title went when they won just two of their first six games. After the Swansea game, van Gaal said the result had “smashed their confidence” and it showed in the games against Sunderland and Burnley.

Despite not being too active in the January transfer market this season, there’s an expectation from the fans for the club to spend big for the second summer running this year. Are the noises from Old Trafford suggesting this could be the case?

I’d expect United to spend close to, if not exceed, the £100m mark. They need a right-back, a centre-back and a midfielder at the very least. If Falcao doesn’t sign permanently they’ll be in the market for a striker, too, so it’ll be another active summer.

Finally Samuel, it’s well past the self-set three month judging period for Louis Van Gaal at Manchester United, what do you make of his spell so far?

Ambivalent. For all the justifiable gripes about the style of football, this time last year United began February by losing to Stoke, drawing with Fulham by sending in 81 crosses and played for a draw at Arsenal – three results that effectively ended their chances of a top four finish.

Under van Gaal, United are winning games they’d have lost under Moyes, they have a fantastic chance of winning a trophy and, despite some strong competition, should finish in the top four. No team has jumped from seventh to champions in successive years since Everton in the mid-80s and I highly doubt any sussed United supporter thought a title challenge was realistic this season.

Van Gaal is making mistakes and some strange decisions. Before United appointed him, he had not managed at club level for over three years and sometimes it’s shown (Antonio Valencia got a THREE-YEAR contract). United’s approach has been remarkably similar to the Netherlands’ style at the World Cup which is risky due to the glaring difference between knockout and league football.

One of United’s problems is they don’t have a senior enough figure to question Van Gaal, either. Albert Stuivenberg was the Netherlands’ Under-21 manager before he joined Van Gaal’s staff and Giggs, despite his playing career, is a coaching novice who looks miserable without his Class of ’92 coterie (and Phil Neville).

Carlos Queiroz wasn’t everyone’s cup of tea but there was something admirable about his ability to coax Ferguson into adopting different approaches, which eventually led to a Champions League win. Rene Meulensteen and Mike Phelan lacked Queiroz’s strong-mindedness and I’m not sure the two Champions League final defeats to Barcelona would have been surrendered so meekly if Queiroz was still Ferguson’s No.2.

Van Gaal sounds and acts like a United manager, which is important, but the football is moribund, pragmatic and – whisper it – against Burnley every player was brought back to defend a corner.

We want to extend our thanks to Samuel Luckhurst for having a chat with us. You can follow him on Twitter here.