Memphis Depay has done his best to help growing speculation over a summer move to Manchester United by favouriting a tweet from a PSV fan website.

The article from PSVUltras.nl quoted reports from Dutch newspaper AD which stated how Man United were willing to pay €28m to bring him to Old Trafford.

Having scored 19 goals in all competitions this season, Depay’s electric form makes him one of Europe’s most prolific players this season which makes it no surprise to see him link with United.

The Louis van Gaal factor would also undoubtedly be a big draw for Depay having worked with him during the World Cup with Netherlands. 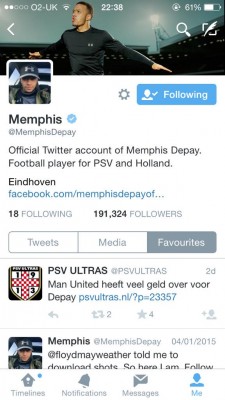 Depay has since removed this from his favourites in order to cover his tracks but not quickly enough to stop plenty of people from grabbing a screenshot.

For a player who only had only ever favourited one tweet, maybe Depay wasn’t aware doing so could be such a public thing but it’s a sure fire way for speculation to gather pace.