Manchester United played some of their best football of the season against Tottenham Hotspur last weekend as they wrapped up a resounding 3-0 victory.

It will be hugely tempting for Louis van Gaal to name an unchanged starting XI for Man United’s clash with Liverpool on Sunday but the match will be a whole different kettle of fish and the Dutchman would be wise to tighten things up defensively.

Unfortunately, that means Daley Blind and Juan Mata may have to be sacrificed despite their good performances against Spurs.

Instead, Luke Shaw will solidify United’s left-flank against the pace of Raheem Sterling while Angel di Maria will offer an outlet on the counter-attack.

It is cruel for Mata in particular given his extended absence from the first-team prior to the Spurs game but United simply cannot afford to slip up against Liverpool.

Elsewhere, Rafael may line up at right-back after coming on as a late substitute against Spurs. His inclusion will give United much more going forward and he could strike up an effective partnership with Di Maria.

Ander Herrera takes up a spot alongside Michael Carrick as it is crucial that United keep the ball on Sunday as well as winning it back. Regardless of the line up, if United play as well as they did against Spurs they will undoubtedly get a positive result. 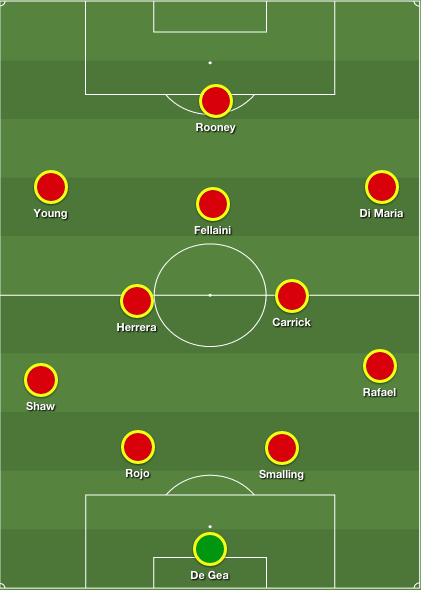