Memphis Depay was in the news last week after he favourited a tweet concerning a potential move to Manchester United and then swiftly deleted the evidence (not before screenshots were taken).

Now, the Dutch winger is back in the news for another social media moment and one that should get Man United fans smiling.

Depay favourited a tweet from a concerned Man United fan who, in no uncertain terms, made it clear what he felt about the hypothetical situation where Depay joined Liverpool.

“If Depay ends up going to Liverpool I’ll seriously consider ending my life,” a United supporter messaged Depay before he favourited it. By the time you’ve read this, there’s every chance he would have deleted it as well but he knew what he was doing. 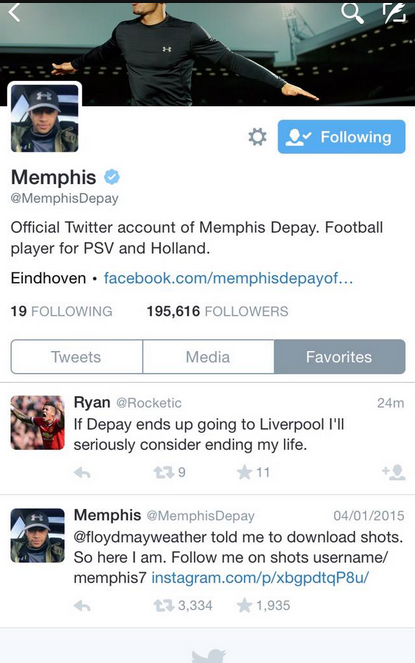 You could put Depay’s first instance of a favourited tweet down to naivety but lightning doesn’t strike twice. He is clearly enjoying the attention and why not? The 21-year-old is having a superb season with PSV and is being linked with a host of clubs around Europe including Man United.

With pace to burn and goals to match, Depay is the sort of winger Louis van Gaal would love to have for a 4-3-3 formation and with the summer fast approaching, Depay is clearly happy for the Man United links to continue bubbling on.