How Manchester United could line-up with Hummels, Clyne and Depay

So it begins! With just six games to go between now and the end of the season for Manchester United, transfer rumours are gradually hotting up.

Last summer, Juventus midfielder Arturo Vidal was the subject of a long-running saga which lasted all summer long right up until the transfer officially closed.

It looks likely that fans will be treated to more of this same this year after James Ducker of the times reported that United are keen on Borussia Dortmund’s Mats Hummels, Southampton’s Nathaniel Clyne and PSV Eindhoven’s Memphis Depay.

Here’s what United’s starting XI could look like if Louis van Gaal signed the trio in the summer: 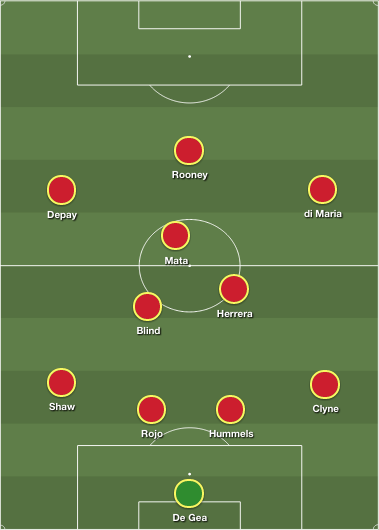 It’s an exciting line up and one that would fill fans with confidence heading into the next campaign.

The team has pace, guile and creativity, although Michael Carrick is unlucky to be left out, as is Ashley Young.

However, anything can happen in the transfer window and it is unlikely that this will be the guaranteed starting XI come the start of next season. United have also been linked to a number of other players such as Paul Pogba, Raphael Varane and Edinson Cavani.