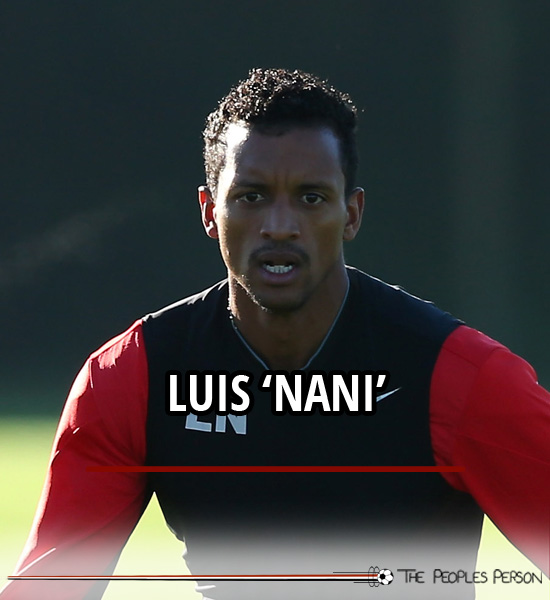 Nani started training with Sporting Lisbon’s academy at age nine whilst playing for local team Real Massamá. He joined Sporting officially in 2003 and turned professional at the start of 2005/06.

He made his debut against Udinese and had an impressive first season.

Nani made his international debut a year later in September 2006 and then helped Sporting to win the Portuguese Cup in the same year.

Nani signed for Man United in July 2007 and made his debut in the Community Shield against Chelsea. His league debut came a week later as a substitute against Reading.

His impact was first fully felt two weeks after his debut as he scored Man United’s winning goal against Tottenham- his first for the club. He won the Premier League and Champions League in his debut campaign.

In 2008/09 Nani was less involved as Man United retained the Premier League and won the Carling Cup, although he played the full 120 minutes of the final.

Nani’s best years at Man United were arguably 2009-2012, though he struggled for consistency throughout. In 2009/10, he started to thrive in Cristiano Ronaldo’s absence, however he became a truly influential player in 2010/11 as Man United regained the Premier League and made it to the Champions League final. He scored nine goals and assisted ten that season and recorded similar figures in 2011/12, scoring eight and assisting ten.

After the 2011/12 season, Nani’s involvement in the team began to decline. He made only 21 appearances in 2012/13 in all competitions as Man United reclaimed the league title but appeared even less under David Moyes in 2013/14, playing only 13 times.

Nani was loaned back to his first club Sporting at the start of the 2014/15 season. He has impressed back in his homeland but appears hopeful of staying with Man United in the future.