Home » Manchester United vs Schalke: How it Happened

Manchester United vs Schalke: How it Happened

I don’t think I would be blowing any trumpets by saying that was the stand-out performance of the season from United. That was a magnificent display of composure, professionalism and the experience of the team shone through. Having been in the semi-final of the Champions League for 4 out of the past 5 years, the feeling before the game tonight was not a new one. It was for Schalke and it was apparent from the whistle.

Schalke started brightly and forced a quick save from Van Der Sar within 30 seconds of kick-off. I immediately thought that the game was going to be as tight and open as I had expected but for the first 45 minutes, it ended up being a mauling of the shoddy Schalke defence and an advertisement for the ability of Neuer. 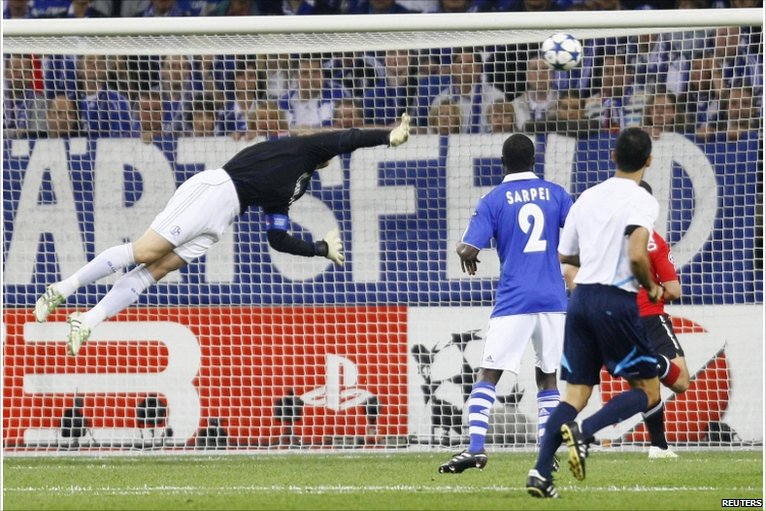 Neuer dives to his left to keep out a Rooney curler

With Neuer announcing that he would not be signing a new contract at Schalke next season after being at the club since he was 4, Neuer has been constantly linked to Bayern Munich and more importantly Manchester United. He showed his composure at dominating his area and countless saves from a variety of situations showed his shot-stopping ability. Also, I thought the distribution that Neuer had was fantastic throughout the game. His throws were pinpoint and were effective in beginning the attacks for Schalke. His personal frustration was evident following Rooney’s goal and it was obvious to the spectator why he has indeed chosen to hang up his boots at Schalke.

Enough about the consistency of Schalke’s only good player of the night. All of our team played absolutely fantastic. Whether it was Fabio running forward into the box or Rooney switching the ball with glorious ease, Manchester United really turned up tonight. Special mention will have to go to Michael Carrick 94 87% and Wayne Rooney: Carrick was composed and elegant from the word go. He was playing enough forward balls to keep the ball up the other end of the pitch but he was calm enough to break up the play on countless occasions. He completed the most passes on the night with 94 passes and a success rate of 87%. He also ran the furthest out of all of United and covered 11.42km. Well done Michael. Wayne Rooney seems to have put his head well and truly back on his shoulders following the unfortunate swearing incident at Upton Park. He showed his maturity in dropping deep just as he did against Everton on the weekend and he once again used the pitch as a canvas for his range of passes. 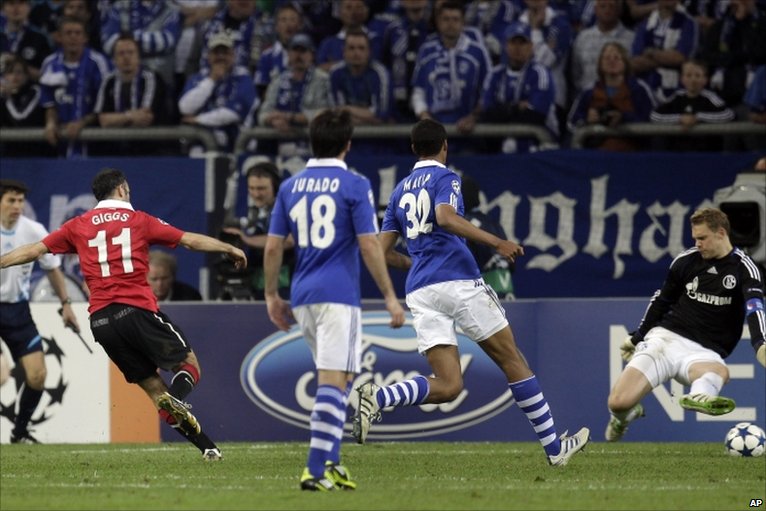 Giggs finally finds the net after some frustrating misses

Ryan Giggs did well to finish after a lovely pass from Rooney but found himself frustrated in front of goal tonight. Quite uncharacteristic of Ryan, he missed a few golden opportunities but he bode his time well and scored at a great time which turned the tie completely in United’s favour. Despite these errors, Giggs put in another ageless performance and covered the second most ground behind Carrick with 11.20km.

I couldn’t have been happier with the performance tonight and we have set ourselves up really nicely for the return leg at home. With Arsenal away on the weekend we will be brimming in confidence and will be looking to put all the pressure back on Chelsea, who are playing Tottenham this weekend, at the same time as hammering the last nail in Arsenal’s coffin for the season.