Home » Manchester United vs Arsenal: How it happened

Manchester United vs Arsenal: How it happened

Chris Foy was under scrutiny for most of the game

Surprise surprise! What do you think people will consider memorable from this first half of football? More controversy of course, what else. A handball from Nemanja Vidic after Walcott whipped in a cross took the ball away from Van Persie who may well have nodded in a goal for Arsenal. The linesman was clearly in line with it and did not give the decision, which would of been a big call to make. Alongside that, Chris Foy probably had more possession in the first half than United have. He managed to get himself in the way of the play on 3 separate occasions which have all been whilst Arsenal have been in possession.

Arsenal piled on the pressure in the first half from the word go. United seemed content at relying on their back line to hold off the final balls from Arsenal and to our credit, we held off well in the first half. We stopped them from having any clear cut opportunities although Wilshere should of done better when Vidic scuffed a clearance straight to his feet but he pulled his shot wide of the mark. Hernandez was anonymous up front on his own with the only attempts to get him in the game coming from long balls over the top only resulting in Chicharito being offside on more than one occasion. 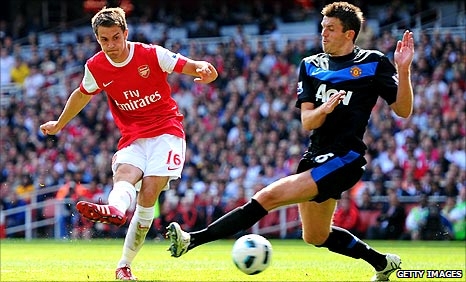 Ramsey slots his winner past a flailing Carrick

We needed to come out in the second half with a more forward thinking approach because if Arsenal were allowed the freedom of space that they had in the first half, they would inevitably create a goal scoring opportunity. That is exactly what they did and after Van Persie lay the ball back toward the edge of the area Aaron Ramsey scored his first Premier League goal since his dreadful ankle break last season.

He chose to turn it on against the team who he turned down as we wanted to loan him straight back to Cardiff. He hasn’t exactly shown up for Arsenal since being back but he stepped into Fabregas’ boots well and it is a shame we didn’t react. In my opinion our best forward player in the match was Fabio which is not saying much for our attacking threats, they just weren’t there. Time and time again I was willing Nani or Valencia to challenge their side backs and make a run past them but they were both guilty of failing to put deliveries in the box, apart from one teasing Nani cross that Hernandez was inches from knocking in. Some late penalty claims from United and a great solo effort from a Rooney free kick were United’s only threats and considering our strike partnership of Rooney and Hernandez had 11 in our last 11 games, we had hoped for more.

It is such a shame we couldn’t of at least come away from this game with 1 point. We go into the game against Chelsea at Old Trafford and it really is the title decider. If we win then we only need 4 points from our Blackburn (A) and Blackpool (H) to win the Premier League. If we lose, then the title is out of our hands and in Chelsea’s once again so let’s not let another season go to Chelsea on the last day. Come on United, show the kind of finesse and class that you did against Schalke in midweek or against Chelsea in the Champions League fixtures. #record19