Arsenal celebrate the only goal of the game

After the abysmal performance at the Emirates on Sunday, United go into the game at Old Trafford on Wednesday with a point to prove. After taking a 2-0 lead away from the first leg against Schalke with a goal a piece from Giggs and Rooney, we are in a commanding position to advance to our 3rd UEFA Champions League final in 4 years and with Barcelona taking a 2-0 lead home to the Nou Camp tomorrow, they are odds on to make it to Wembley as well. This is not to say that either tie, however, is a done deal.

SAF has been talking to the media before the game and has said what I expected him to say when he talked about the imminent rotation that would happen with the game against Schalke.

“I will make some changes on Wednesday without question. I will bring Paul Scholes back in, Dimitar Berbatov, Michael Owen. We’ll need to do that but I will probably keep my experienced players at the back. We have a big week ahead. Wednesday is a European semi-final second leg and then the game on Sunday.Two massive games, so we will regroup and freshen it up.” 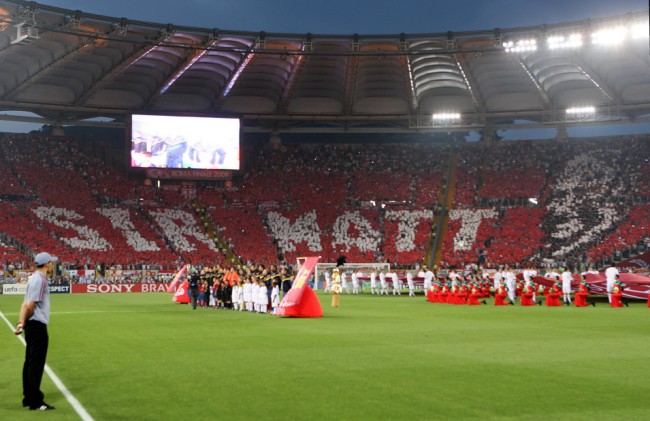 Hypothetically we don’t need to score on Wednesday but that is not what I expect us to do in the slightest. Some question whether Old Trafford is a cauldron of noise anymore but with our formidable home form this season, nobody can question our home advantage. It is incredible. We are a completely different team at home than we are away but with 2 home games in a week, we will be looking to continue our home form this season. Something I will be looking forward to is the 30,000 people mosaic of 3 European trophies that will be erected prior to kick-off. I am hoping that it will have the same impact as the Sir Matt mosaic we did in Rome and the fans will be noisy from the first whistle. 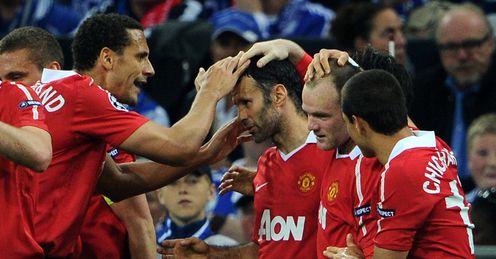 United celebrate their opener against Schalke

One thing I am already worried about is complacency because with the game on Sunday being the make or break fixture of the Premier League season, SAF and the players will have to not let their minds drift and finish the task at hand against Schalke. SAF says he will look to keep his experienced players at the back but I cannot see him risking Ferdinand playing 2 games in 1 week and if Giggs is to play a pivotal role in the game against Chelsea on Sunday, I do not see him playing a major role in this fixture either.

Despite all these nervous thoughts, I am confident we will treat Wednesday with the respect that the fixture deserves. I fully believe we will close the game out before 45 minutes and leave ourselves a laboured second half so that we are not stretched and 100% ready for the pivotal fixture on Sunday. I will personally be hoping that Owen and Berbatov can prove themselves and both get on the scoresheet because the more strikers we have in form, the better our options will in the last few games of the season. A lot of attention will be on whether Paul Scholes can hold himself on his return match from his red card at Wembley and I fully expect him to dictate from the get go. Come on United. Get to Wembley and make it 2 out of 2 European finals when we do.

United celebrate their opener against Schalke