Manchester United: The Road to Wembley

After 9 months of football, United have reached the promised land for the 3rd time in 4 years. After destroying Schalke 6-1 over the two legs, we have set up another final against Barcelona. Do you remember how we got there? Let’s have a look back at the games, goals and memories from the campaign which will end in Wembley on May 28th with Vidic holding the Champions League trophy aloft.

Rangers came to Old Trafford with a negative 4-6-0 formation in the hope of taking away a point. The return of Wayne Rooney held the focus of the media prior to kick off but a quiet performance from him was quickly overshadowed by the terrible injury sustained by Antonio Valencia. The injury came out of a perfectly reasonable lunge for the ball from Broadfoot but ended with Valencia missing the majority of the whole season.

Valencia getting stretchered off after the injury

I was in a bar on Koh Sahn Road in Bangkok and it was 3am. I was on surrounded by ladyboys and I was screaming at the top of my lungs. What a fantastic game.Valencia away is no easy feat. The Mestalla is a cauldron of noise and hosts a lot of the Spanish international fixtures, so United had to pull out all the stops in this game. We were pegged back by Valencia who dominated most of the game but their lack of clinical finishing in the game was punished. Macheda and Hernandez came on in a double substitution from SAF and they provided us with the move of the match that was finished off in some style by Hernandez with a left foot drive to the bottom right hand corner. This was his first important goal for us but little did we know just how important he would become in the whole campaign. 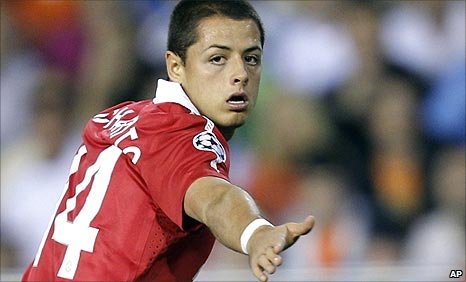 Hernandez can't even believe it himself

Not particularly a game to remember but definitely a goal to remember. SAF set out a subdued lineup for this game and brought in the inexperienced Smalling, Macheda and Obertan in an attempt to give them some big game experience. It was a move that paid off thanks to Nani’s fantastic strike early on with his left boot from outside the box. It gave United control in the game from early on and Bursaspor, who had never scored a goal away in Europe prior to kick-off, at least managed to hold onto their record. 7 points from 9 and United were off to a great start in the campaign.

The main thing I remember from this game is the fantastic support that the home fans showed. When we were cruising at 3-0 up in the 90th minute, they were still singing in full voice. The first half was a bit of a tense affair really and VDS pulled out some cracking saves to ensure that wer went into half time with a clean sheet. SAF worked his magic and we turned the game up a notch in the second half with a goal from Darren Fletcher. Obertan and Bebe managed to get themselves on the scoresheet and opened their accounts in Europe for United. Overall, a comfortable win.

Rangers approached this game in similar fashion to the fixture at Old Trafford in September, that is to say they did not have an attacker. Another 4-6-0 created a one sided affair but for all that United tried it seemed that they wouldn’t be able to come away from the game with 3 points. Then, a burst from Fabio into the box and a rash challenge halted the diminutive Brazilian and Wayne Rooney stepped up to end his goal drought and send the travelling fans into uproar. Good character shown from Wayne to bury a pressure penalty and it left United atop the group with only Valencia at home left. If we kept a clean sheet at Old Trafford, we would become the only team to qualify without conceding a goal…

Wayne took a weight off his shoulders with a good penalty

Michael Carrick‘s mistake in this game didn’t actually affect anything apart from what would have been a special record to hold. It was probably because of his mistake here that let Pablo nick a goal past Ben Amos, who was making his Champions League debut. Anderson has been one of my out and out favorite characters at United ever since his move from Portugal with Nani. He really seems to be a form player so I was happy when the ball fell kindly for him near the edge of the box but a quick finish pulled United level and we went through to the knock-out stages without losing a game. Great group stage from us this year. Best part of the group stage? Rooney letting Hernandez know who is boss…

Jitters, jitters, jitters. This game turned out to be an extremely tight affair with both sides looking to score but neither side being able to. The best chance of the game fell to Darren Fletcher but his 18 yard drive was held by Marseille goalkeeper Mandana at the second attempt. I wouldn’t say I was disappointed with this result but to go back to Old Trafford without an away goal after what happened last year with Bayern Munich? I was nervous. 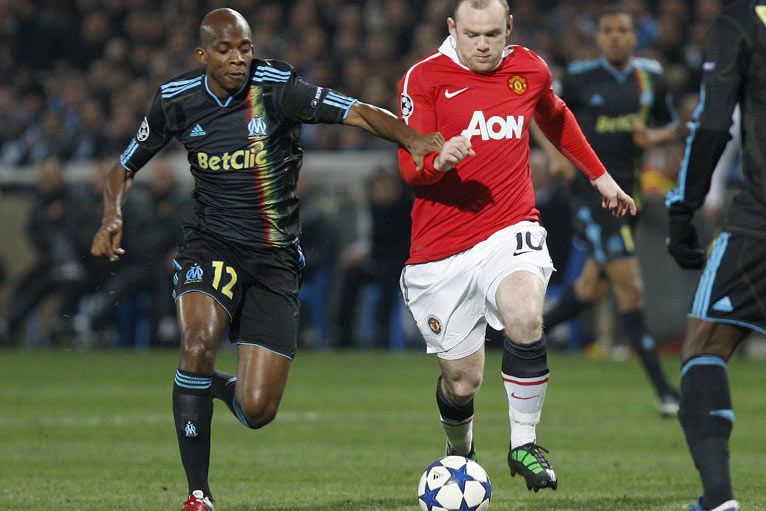 Rooney battles with Kabore for possession

What do big games need? Big game players…or a small Mexican. Hernandez stepped up to the plate in this game and cemented himself as an instant cult hero with the Old Trafford faithful by scoring 2 goals down only to his own hard work and fantastic positioning skills. A sweeping move ended with a delicious square ball from Rooney that Hernandez willingly smashed into the roof of the net. The second came in a similar fashion but this time Giggs turned into the provider and Hernandez ensured he didn’t miss. Wes Brown tried his hardest to make it a tense affair by scoring an own goal but we held out. Who did we draw in the quarter final? Who else. Time to put the Chelsea season into meltdown…

We went into this game with a dismal record at the Stamford Bridge in recent years, going without a victory since 2002 but as it is with European football, history doesn’t make a difference. Definitely a contender for goal of the season, Rooney finished off a wonderful passing move from United which started with Carrick’s best pass of the season. Sometimes scoring this early away from home can sometimes work against a team without the mental capacity to hold off the opposition but we were a different team in this game. It was our performance of the season thus far and with Giggs playing a more central role, he was able to conserve his energy and dictated for longer. Nobody knows how Ryan keeps doing it but for our sake, let’s hope he can continue.

Would we be able to play as well as we did at Stamford Bridge in the first leg? No. We played better. This game exceeded the Stamford Bridge performance without a shadow of a doubt. Giggs once again took centre stage and played a fantastic game, again holding deeper more often to pick up possession quicker. As reliable as Giggs has always been, Hernandez proved himself to always be in the right position at the right time so far this season and this game was another occasion. A great square ball from Giggs fell at the feet of Hernandez and even though he tried his hardest to miss, the ball clashed into the roof of the net. Old Trafford fell silent after Drogba neatly took a ball down with his chest and rifled past VDS but less than a minute later, our big-game General Park Ji Sung sent Old Trafford wild and gave us our 2 goal advantage once again. This was probably one of the best United games I have watched live in recent seasons, they showed great determination and character to hold their nerve in this tight affair but now that Chelsea were out, the dark-horses from Germany in the form of Schalke were what stood between us and the hallowed turf of Wembley.

After knocking out Inter Milan 7-3 over 2 legs, Schalke made it to the semi-final of the Champions League for the first time in history. From the first whistle however, the game was a slaughter of Schalke’s defence. If not for the superb shot-stopping ability of Manuel Neuer then the game would of been over by the first half whistle. As it happened, we went in 0-0 and cut a frustrated picture as we couldn’t do anything to get on the scoresheet…we needed a moment of magic. Step up Wayne Rooney. An insightful and splitting pass let Giggs get through on goal and despite missing a couple of opportunities earlier on his right foot, made no mistake with a cool finish between the legs of Neuer. Just like buses, goals in this game came in pairs and a dink from Hernandez let Rooney slot home with a good finish from inside the box. The final whistle blew and United had dominated for 90 minutes. Not even I thought United could be this dominant in a match, especially away from home but when push came to shove, we performed like champions.

I always trust SAF but even I had to put a little question mark over the fact that he made 9 changes to the starting line-up in a Champions League semi-final. An early goal from Schalke and who knows what might have happened but as SAF has proven to me time and time again over the years, never question him! An early goal from Antonio Valencia effectively killed the tie off as a competitive match and it was easy sailing from then on. The same Manuel Neuer from the first leg didn’t turn up tonight and let a Gibson shot deflect off his palm and into the net. 2-0 up on the night and 4-0 up in the tie? Fantastic. Not even a mistake from Chris Smalling could ruin anything as Jurado pummelled in a consolation for Schalke. My little man Anderson turned up in the second half and I love it when he runs with the ball, he looks so confident. The 2 goals he scored in this game will hopefully make the world of difference to his confidence, great job Ando.

Anderson bagged himself a brace in a brilliant performance

Here we are. 1080 minutes of football later and Manchester United have made it into the UEFA Champions League final for the 3rd time in 4 years, an absolutely fantastic achievement. Only Barcelona stand in the way of United and our 4th European title but we will be looking to turn around the result from 2009. Barcelona will be favorites going into this game but Manchester United are born winners. I will be making the trip to Wembley for the day and hoping that I can find a big screen to watch it on, so should you!  Where does this leave us? All eyes immediately turn back to the Chelsea game on Sunday and I will post a preview for this title-deciding fixture over the next couple of days, so keep checking!