After beating Chelsea 2-1 in a thrilling performance at Old Trafford last week, United go into this weekend the odds on favourites to emerge on the other side as Premier League champions. With only 2 games remaining in the season, United need to secure just 1 point from a possible 6 to claim what would be their record 19th title.

The anticipation and build-up to the fixture last weekend was only forgotten with the outstanding performance that our players put in. The battling 2-1 victory over Chelsea meant that United put one-hand on the coveted Premier League trophy and they will be going to Ewood Park to try and find the 1 point they need to secure the title. With the UEFA Champions League final fast approaching, SAF will no doubt be looking to try and get his players mentally and physically prepared for the showpiece and he will want to wrap the title up this weekend. The situation at Blackburn is a contrast to say the least.

Blackburn have only managed 1 win out of their last 12 games and sit precariously 3 points above the drop zone. Sometimes at this point in the season it is more difficult to play the teams at the lower end of the table as they are involved in a relegation scrap and Blackburn is the case. They know that a loss against United might see them slip into the bottom 3 going into the last game of the season and they will be keen to avoid such a situation. How do the squads look?

Blackburn are boosted by the return of Phil Jones, David Dunn and Michel Salgado into the squad but still remain without Ryan Nelsen and Vince Grella is definitely not going to be playing in the fixture. I have been watching Phil Jones this season and he looks like one of the best English utility prospects, having had good performances in both the centre of midfield and controlling his box when he has played at the back. After watching Blackburn lose to Manchester City 1-0 a couple of weeks ago, they do look like they are going to put up a good battle against United tomorrow in the early kick-off, so I am not expecting an easy game.

SAF will probably bring in a couple of changes to the line-up for this game because of the demanding fixture list of the past few weeks. The last thing he needs is players suffering from fatigue at this time of the season. Van der Sar looks like he might get a rest tomorrow and Ferdinand may well have a rest to make sure that he doesn’t aggravate any niggling injuries. Although, if Rio plays it will be his 600th appearance for the club and SAF may want to give him the chance to earn this personal milestone. Berbatov, who has disappeared recently due to the form of Hernandez, scored 5 in the corresponding fixture against Blackburn at Old Trafford this season so he may be in line to start tomorrow. Will SAF sacrifice the now elusive partnership of Hernandez and Rooney? I hope so. Berbatov deserves his moments in the spotlight. Up until the start of January, United relied on the services of Nani and Berbatov to create and score goals. Since the turn of the new year, Rooney and Hernandez have been the most effective partnership. The depth and quality of our squad is obvious to anyone taking even a passing glance.

Giggs may break another record tomorrow

An appearance we will all be hoping to see is Ryan Giggs. If he steps on the field tomorrow, he will equal David James’ appearance record in the Premier League of 573. What a fantastic achievement yet again and if he does it tomorrow, he may be able to use the final game of the season to secure his own personal record at the same time as United securing their record 19th title.

The game tomorrow is an early kick-off of 12.45 so let’s hope that we will have all weekend to celebrate the victory. I can’t see United slipping up and becoming complacent at this point of the season and I hope that we put in another champions performance tomorrow. Come on United. I’ve posted what I think will be the starting line-ups and my prediction of the score below. Thanks for reading and comments are always welcome. 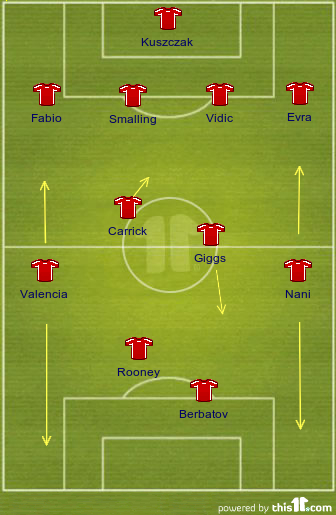