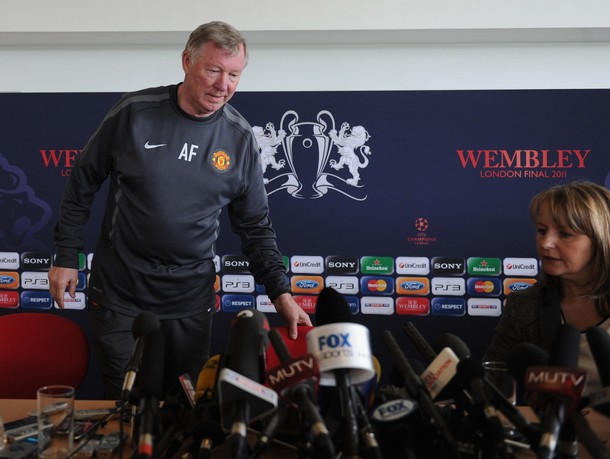 Sir Alex Ferguson has today given his final press conference prior to the Champions League final on Saturday and answered questions surrounding the fixture. Having already played Barcelona in the 2009 Champions League final, SAF knows what to expect but admits it will be a tough fixture, placing a stand-out necessity on stopping Messi as an important factor if United are going to win the game.

Barcelona are indeed aware of the threat of United and Messi has outlined Hernandez as a danger man going into the game. SAF also took time to talk about the last time the European Cup was won at Wembley in 1968 by United:

“My memory of 1968 was that I was disappointed Denis Law wasn’t playing. I think everybody in the whole country, particularly in Scotland because of Matt’s links, was rooting for them and I was one of them. It was a fantastic feat. He lost most of his team in ’58. To rebuild the team and win it in ’68 was incredible, plus most of them were home-produced players. It was a fabulous achievement and the whole country was behind them.”

Ferguson has also quashed beliefs that playing at Wembley will be an advantage to United, even though they go into this game as the away team due to the draw of the knock-out stages:

“I don’t think there’s any advantage playing at Wembley. We don’t decide on these things, we have to rely on our players to perform. I think we’re ready and we’ve prepared very well.”

So, that is the final press conference we will see from SAF prior to the game on Saturday and the realisation that the Champions League final is only a matter of days away is now very real. I will be posting a match preview over the next couple of days so keep coming back and have a read.