Home » Will the youth get a chance next season?

Will the youth get a chance next season? 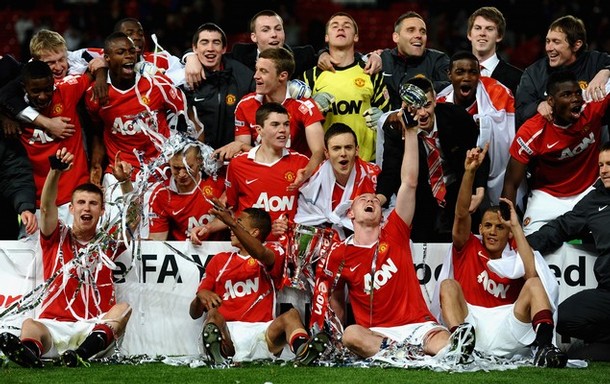 After reading an interesting article on why United might not sign another midfielder next season (take a look here), it got me thinking about the possibility of United not signing a midfielder again. I already wrote an article on the subject, looking at the possible formations and what our team might shape up like if we didn’t sign any new players but after reading that article by Jim White, it highlights how I didn’t go into enough depth about the youth. This season marks the biggest upheaval at United since the 1996 season as we look to revitalise and replenish the energy of the squad in order to maintain our chances of retaining the Premier League title and SAF looks toward the challenge of dethroning Barcelona from their European dominance.

Ever since Sir Matt Busby instigated an emphasis on nurturing youth at United with his immortal Busby Babes, we have been famous for giving our young players the chance to prove themselves and try and work their way into the first team. Now that Paul Scholes has retired, a United youth product himself, maybe it is the right time to promote some of the youth players from the lower ranks and give them their chance in the senior squad. On that note, who do I think may well be ready to make the jump? For me, 3 names stand out. Note: I am not putting Ravel Morrison in this list because he does not deserve the chance to step up to the senior squad. Time and time again his off-field antics overshadow his incredible ability on the pitch and as long as he has this unfortunate characteristic, SAF will not give him the respect he has not earned.

Tall. Strong. Creative. Shooting ability. Paul Pogba ticks so many boxes. If you haven’t heard his name being mentioned over the past 12 months then you need to stop sleeping behind a rock. Touted by many as the greatest prospect to have come out of the academy since Paul Scholes, a label not thrown around lightly, this season could be his chance to break into the first squad and establish himself as the missing midfielder. Pogba is a French-born academy starlet who has grown exponentially over the past few seasons and looks all the part like he is ready to make the step up to the senior team. Some may argue that at just 18 he won’t be mentally ready to move up but when you consider that both Cesc Fabregas and Wayne Rooney established themselves at 18 in Arsenal and Manchester United respectively, then you quickly realise that some players are just born to start their careers early. Having won the FA Youth Cup last season in convincing fashion, he has already tasted the glory of lifting a trophy for United and getting a glimpse of success at a young age must do wonders for the mentality. Paul Pogba makes takes the hard work of being a midfielder and glazes it with a glamorous ease that is contagious when you watch him and his grace in possession is something that shows he is ahead of his years. When you watch a young footballer of Pogba’s talent you realise that he will eventually break into the first team. Will it be this season? I think it could be. If he can bring some goals of the quality he has scored during his times with the academy and the reserves, as well as everything else he has in his game, then United need look no further than Carrington for the replacement for the indomitable Paul Scholes.

Second on the list is all-round midfielder Ryan Tunnicliffe. This 19-year old academy product earned his stripes last year as he picked up the Academy Player of the Year Award at the annual Player Awards after a fantastic season with the team. In terms of his strongest position, it is sitting right in the heart of the midfield, pumping balls to start attacks and sticking his leg in whenever it is necessary to stop the opposition (sounds like Scholes at all?). He likes to be the hub of everything and what a characteristic that is to have. Michael Carrick is all but guaranteed in our starting line-up next year to pose as the brick wall for the opposition and for him to put in the sort of performances that made him so important in the 2008 season, he needs a diminutive partner to take away the responsibility of bringing the ball forward and Tunnicliffe would slot in beautifully in that respect. He just looks like the sort of character that is ready to rumble in the Premier League and the physical aspect of his game is something that would help him greatly in adapting to the big stage, considering how the physical side of the game has grown hugely over the past few seasons. Is he ready? I wouldn’t have his name on this list if I didn’t think he could step into the senior squad. He could be the engine that the midfield is missing and if you haven’t had the chance to see what he is packing in his passing arsenal, take a look at the extended video below that showcases the best of what Ryan has got. 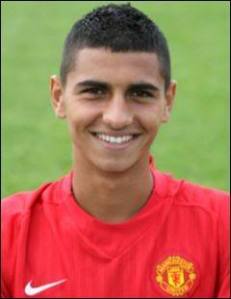 Third and finally, I want to give a mention to Davide Petrucci. It has to be noted here that out of the 3 names mentioned, Petrucci is the least likely to break through due to the lack of game time he has been able to get but he is such a talent that it is still worth discussing. Bought in 2008 from Roma, this Italian sensation has had a rough time at Manchester United. Injury has blighted the progress that seemed so promising after he penned a deal at Old Trafford. In August 2008, he scored 5 goals in 14 appearances to help the academy lift the Milk Cup in Northern Ireland and he quickly progressed to the reserves in 2009 but a groin injury stopped his rapid rise in the Manchester United lower teams that stopped him from playing football for a year. After speaking to MUTV in May, Petrucci claimed that he was back to his best.

“It’s a great feeling and I’m feeling each time better and better. It’s very positive at the moment and I’m looking forward to playing more games, even though the season is nearly over now.”

SAF obviously saw something special in Petrucci when he tried his utmost to get the highly rated all-rounder to sign a deal at United. The 19-year old midfield prospect looks like a fantastic player when you get to see him play, bringing a foreign flair to the game that is so sought after. It is his shooting that I am so impressed with and his ability with the ball at his feet. Dribbling won’t be a problem for Davide when he gets his chance for United and neither will scoring goals but he has also possesses a great calm in retaining possession and distribution of the ball, characteristics that are so paramount in terms of replacing the capability of Paul Scholes. I don’t think that Petrucci will get a chance next season but I am so excited by his future prospects that I felt he deserved a special mention. Hoping he can have a good off-season and go into the reserves next year and maybe we will see him break through in the 2012/13 Premier League season.