Gary Neville: You can see the transition of a new football team in front of your eyes 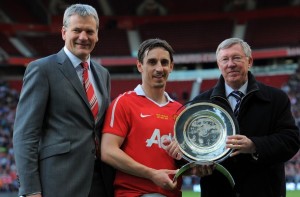 Gary Neville is becoming a firm favourite of mine in front of the camera following his retirement. He presents himself well and always seems to have a great input to say to the media and at the unveiling of a temporary exhibition at the Old Trafford museum in admiration of his achievements at Manchester United, he took time out to answer a few questions. Here is a transcript of some interesting parts of the conversation but for the full interview, check the link at the bottom of the page.

You mention your retirement, is it sinking it now that the pre-season is starting?

It doesn’t feel strange because I have been retired for 6 months now but when you talk to some of the lads who are doing what you did for 19 years and it is wanted I wanted to do but now it is not my time anymore and it has sunk in, definitely.

What do you make of the new signings?

They are young, which doesn’t surprise me. If you look at the players who have left in Paul Scholes, Owen Hargreaves and Edwin Van Der Sar, the manager has replaced them with young talent, people who he thinks can grow and have the potential to deliver great things for the club and I am excited for them. Obiously, Phil Jones I think will be a great signing and Ashley Young has come of age in the past 12-18 months but I don’t know much about the goalkeeper [David De Gea] but I know the way in which the manager and Eric Steele, in particular, have looked at him. I’m excited that they still have a mountain to climb and their whole careers ahead of them and it has always been the way of the club to sign players who want to match that ambition of the club.

Number 19 was massive for the club but it doesn’t look as if SAF will stop there?

No, absolutely. All the people who question when he is going to finish just have to look at him buying young people, people who are going to play for the club for 5-10 years and it tells me he has that belief in young people and that he wants to stay around and see them develop into a great United team, which you have seen grow in last 12 months. Fabio, Rafael, Evans, Smalling, Hernandez and you now  see 3-4 younger players coming in and you can see the transition of a new football team before your eyes.

Full interview and information about the museum: ManUtd.com