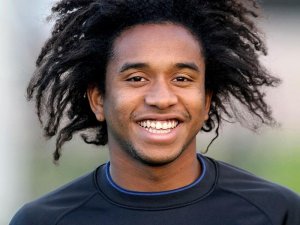 Over the years I’ve had a deal with a friend of mine who happens to be a City fan. The deal is that I go to a pre season friendly at the boo camp with him and he comes to one at the Theatre of Dreams with me. Considering the size of some of the teams we have watched in these games (AC Milan, Juventus, Barcelona) there isn’t much that stands out when we reminisce. One thing I do remember is watching City v Porto in 2006 when Anderson was playing for Porto and he ran City ragged!

He was involved in everything, involved all over the pitch like a proper box to box midfielder; crunching tackles, quick one touch football, cross field passes and if you believe me, he was really unlucky not to score after hitting the bar from 25 yards! It was a master class. My friend turned to me after the game and said “that guy with dreads was quality”. No arguments from me. Less than twelve months later he signed for United for £18million and after what I witnessed at Wastelands, I considered it to be a bargain!

In his first season at Old Trafford he lived up to my expectations playing in 38 of the seasons 56 games. His stand-out performances came against Liverpool and Arsenal. He bossed midfields containing Steven Gerrard and Cesc Fabregas and in the process inspired a fan favourite terrace chant. He even stepped up to the plate to slot home a sudden death penalty in the shootout of the 2008 Champions League final. At twenty years old, he was already a Premier league and European Cup winner with the world at his feet. It was looking like we would manage replace Paul Scholes after all his progress and growth, second season syndrome struck

In the 2008-2009 season Anderson was involved in 38 of United’s 65 games but although he didn’t play badly, he was not the player we were all expecting to light the footballing world on fire. Despite winning a Premier League and a Carling Cup it was not upto the standard he set for himself the year before and unfortunately, 2009-2010 was much the same. Playing only 23 times and struggling for form in the first few months of the season, he was looking a shadow of the player he could of been. He did however manage to score his first goal for United, away at Tottenham but a bad cruciate knee ligament injury cut his season short a week shy of a second Carling Cup medal. After almost recovering from his knee injury Anderson was dragged out of the flaming wreckage of his Audi R8 after a night in a Portuguese night club, putting his already fragile relationship with Sir Alex under more strain.

He made his return to football in 2010-2011 with a 2 minute cameo against Liverpool and then played in 5 more games while regaining match fitness. After another 3 weeks out, he came back into the team with a string of top quality performances in the league against Blackburn and Arsenal and also scored his first goal at Old Trafford in a man of the match performance against Valencia. These are the kind of performances Anderson is capable of. Finishing the season with a goal tally of 4 looks a lot more respectable than the 1 goal in 3 seasons he had previously.

Week in and week out Anderson has not lived up to the promise he showed in his first season at Old Trafford. Glimpses of the quality he possesses have seldom been shown but the fact it has been shown gives us hope that he will be able to battle his demons and become the midfielder United need! The coming season is most definitely make or break for his United future. Having signed a new four year deal last season, Anderson needs to stake his claim and prove to the United faithful he is worthy of a place in the club’s history. In the four years he has been at Old Trafford he has suffered a few serious injuries at the worst times, either when just hitting form or when impacting on getting a full pre season schedule under his belt. Hopefully this year he will get a good work out on the tour of America and be ready to start firing on all cylinders for the start of the season.

The stage is set for somebody to fill the midfield void at Old Trafford. The irrepressible Paul Scholes has retired and Darren Fletcher is still battling with the virus that kept him out for so long last season! With Michael Carrick being our only proven central midfield player, Anderson needs to get his head down and work hard to prove he has what it takes to make it at the biggest club in the world. If we do sign that Dutchman currently playing in Italy, Anderson’s role may only be as back up but whether it is backing up a Dutchman or replacing Paul Scholes, he will have massive shoes to fill this season. Let’s just hope he can finally prove he is the midfield magician we all thought he would be.