Three games into the new Premier League season and the continually rising stock of Tom Cleverley faced its biggest challenge – a home fixture against rivals Arsenal. In both fixtures prior to the Arsenal game, Tom showed the kind of progress and improvement that you love to see in your young stars. Few felt that Tom had the capability of coming close to replacing Paul Scholes, myself included, but what he is showing us in every game with his improvements is that he is far from a finished product. Replacing Paul Scholes was nigh on impossible, such was the rarity of his talent, but what we may well have found in Tom Cleverley is someone that SAF can leave behind who has the capability to forge a future as wonderfully glamorous and hopefully as long as that of Paul Scholes. His wonderfully executed cross to Danny Welbeck last week was the least he deserved in a game he looked confident in and going into the game against Arsenal, his self-belief was matched only by his ability.

SAF chose to not bring in Carrick or Park to the midfield and believed in his youngsters, and suffice to say his faith paid dividends. An early shot from Tom Cleverley in the second minute showed nice forward movement from the midfield man but he just couldn’t steer his shot on target. Hopefully some of Anderson’s goalscoring form that has seen him score 4 goals in 6 games will start to rub off on his playing partner. The quick, inter-changing football that United have found in recent months is a real joy to behold: in previous seasons, United fans have been left wanting for a flowing game of football but since Anderson and Cleverley have played centrally together we have found a new lease of footballing life, shown by the fact that we had more attacking passes in the game (287) than we did defensive ones (255), a testament to the football we have been graced with over recent weeks. 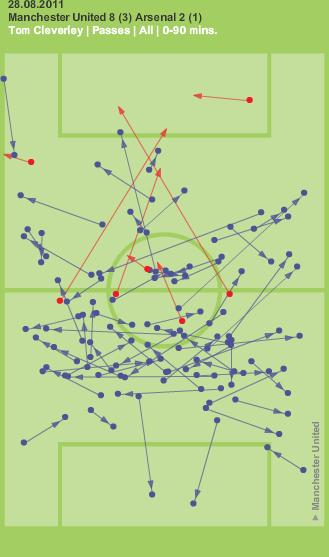 Individually in the game, Tom Cleverley was simply overshadowed by the sheer amount of goal-mouth action that Old Trafford received, and rightfully so, but he held his own comfortably in the game and his statistics complimented another sturdy performance. A perfectly weighted ball that was going to set Ashley Young free before Jenkinson mauled him down led to Rooney’s sublime free kick that made it 3-0 – as I said in previous weeks, it was simply a matter of confidence before Cleverley began to start adding long passes into his game and it seems that the confidence came sooner rather than later, such is the quality that this young United squad possesses. Completing 62 out of 69 passes, he once again held a 91% pass completion average and it was not simply a one off. Overall in the season, Cleverley has completed the most passes out of all United players with 150, ahead of Anderson (137) and Smalling (136) and the early signs are that Cleverley can really be a driving force in the middle of the park for United this season.

Tom is also showing signs of being a more complete midfielder than most would have thought, combining his defensive and attacking aspects into a well oiled style of play. He won 60% of his tackles and 65% of his possession duels in the midfield, showing great physicality when necessary. When a fantastic 1-2 with Hernandez in the 60th minute brought Cleverley through on the Arsenal goal, only a weak finish stopped Tom from claiming his first Premier League goal this season – a real shame and the only noticeable blip on an otherwise unblemished performance. Despite this, another 90 minutes under his belt, combined with one of United’s most ruthless victories in recent years and Tom has had the dream start to the season, something he says will not sweep him off his feet:

“Nobody wants to get too carried away but this is a youthful squad and it is exciting to be part of it. Some of us younger lads don’t know what it is like to win the Premier League yet but that is where the experience of others comes into it. A few older players left the club in the summer but we have still got experience in abundance.”

If Tom can show the sort of consistency and quality across this whole season that he has already shown in the first 3 fixtures, then he will be a front runner for Young Player of the Season without any exaggeration. Few can question the impact he has had upon breaking into the first squad and Carrick looks set for a stint on the bench if the form of Anderson and Cleverley continue into the future. I still think a substantial challenge of the likes of Liverpool or Chelsea will need to happen before Cleverley truly establishes himself as a regular but as of now, he can sit happy on his progress thus far.