Will this be a season of mediocrity? 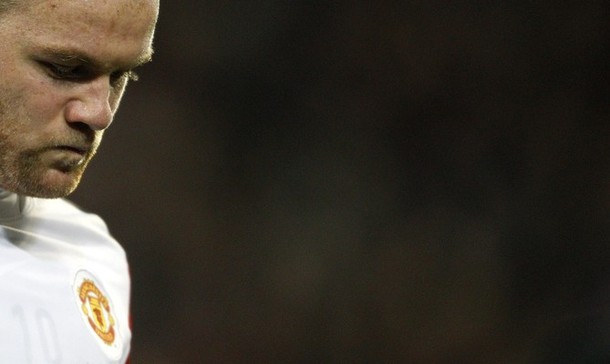 Rooney walks with his eyes to the floor following the match in Basel last night. Photo: Christian Hartmann (Reuters)

Manchester United crashed out of the Champions League last night after losing to FC Basel 2-1 in a game that they had the lion’s share of both possession and chances. It was a performance that epitomised the characteristics of a lacklustre campaign, with poor finishing and sloppy moments of defending ultimately leaving United with only the Europa League to contend with this season. The first and most important note to take from this exit is the fact that the campaign was not lost last night in Switzerland, but the overall performance in the group left a lot to be desired. The stand-out match is no doubt the 3-3 draw with Basel at Old Trafford in which a youthful United naively threw away a lead to almost lose the game if it wasn’t for a last gasp header from Ashley Young. I attended the 2-2 home draw against Benfica a few weeks ago and it was yet another performance where fans were left scratching their heads at the almost amateur moments of defending that deflated United and eliminated the fear factor that teams had when they faced us.

In the 2010 Champions League campaign, Manchester United only conceded 1 goal through an error of judgement from Michael Carrick but in the 2011 Champions League campaign, United only managed 2 clean sheets (both against Otelul Galati) and conceded 8 goals – a far cry from the consistency we had anticipated going into the competition. I will be the first to admit that I chuckled inside when the Champions League draw came out as I couldn’t believe our luck, first place was ours for the taking, surely? How wrong was I. There are just simply no stand-out moments from what was a continuously dismal campaign – the 2 victories against Otelul Galati are nothing to be gloating about and our inability to hold on to winning positions hurt us terribly and for me, inexperience showed.

The Premier League is a whole different battleground to the wonders of European football. Pressures seen in domestic matches are a far cry from the intimidating atmospheres that midweek football generates and United clearly struggled to cope with it. The loss of Paul Scholes, Edwin Van Der Sar and Gary Neville has quite obviously had a much greater impact than we all had envisaged – if not for the quality of the players that they were than simply having experienced faces in the dressing room. Van Der Sar saved that all important penalty in Moscow, Paul Scholes’ scored a screamer against Barcelona in 2008 and Gary Neville was there on the fateful night in 1999 when history was made. These are but three memories from the plethora of European nights that these players were involved in but when you think that they have been replaced by David De Gea, Chris Smalling and Phil Jones, you soon come to realise that transition takes time.

I have no doubt that De Gea, Smalling and Jones will all play a major role in the development of a new squad founded on youth as SAF once again tries to build a new armada but the exit from the Champions League is a massive wake up call to any United fan that thought we would simply be able to brush away the remnants of the Old Guard without suffering the immediate consequences. Fans were left furious when SAF decided not to bring in a midfield replacement for Scholes and the longer the season continues, the more apparent the gap in the midfield really is. For all his ability, Jones simply does not yet have the spatial awareness needed for the midfield role that is being asked of him and our makeshift midfield is seriously denting and limiting the opportunities we can create for ourselves this season. To go from appearing in three finals in four years to crashing out of the group stage for the first time since 2005 is a bitter pill to swallow but it is all that United deserved after such a consistently poor campaign.

Manchester City went out last night as well and if anything, it will make winning the Premier League harder. They have a big enough squad to compete in multiple competitions but leaving the Champions League at the group stage in their debut year will make them even hungrier to try and pry the Premier League title away from us. Their squad, in quality as well as size, is so much stronger than United’s and it is going to be a very tough task for us to try and stop them gaining the bragging rights to Manchester. It feels like a time long ago that United were beating Arsenal 8-2 one week and Bolton 5-0 the next but it was only just a few months ago – what a difference some time can make. United are really struggling with injuries and with Anderson/Cleverley/Vidic/Rafael/Fabio/Berbatov and Hernandez all sidelined, the already thin and inexperienced squad is going to be stretched to the limits. I hate to be the pessimist as optimism is always essential in football but I am mightily prepared for a trophy-less and mediocre season. We will, as is the United way, fight until the bitter end but the way the season is shaping up, I cannot see the red ribbons of Manchester gracing the Premier League trophy this season, not with the levels of competition that surround it. I hope that everything I have written is proven to be absolutely wrong but I just have a feeling in my heart of hearts that this season will leave nothing to be remembered in the years to come.