Reaction to the Manchester City game

A child grabbing at something it can’t reach. A whimper. A farcical attempt at title retention. A poor performance that typified a gulf in class.

Going into the City game, I was not particularly filled with expectation. I knew that City had the far greater squad strength and we may have to play second fiddle for the majority of the game. However, I was not expected for what I watched over 90 minutes.

My face was buried in my hands even before the first whistle blew. Park Ji Sung starting a game for the first time in three months? Giggs and Scholes starting together? No Valencia? No Welbeck? Rooney isolated in the 4-5-1 formation that SAF has typically reserved for European nights? This was always going to be a tough game to watch from the red side of moon and it was nothing short of humiliating.

How could Valencia not start? Our most in-form player who has brought our attack to life in the second half of the season? It was an unbelievable decision that I knew we would rue. Even putting him at right-back instead of Phil Jones would of at least given us some sort of attacking impotence but it was just a single example of a change in tactics that contributed to the shambles of a performance. 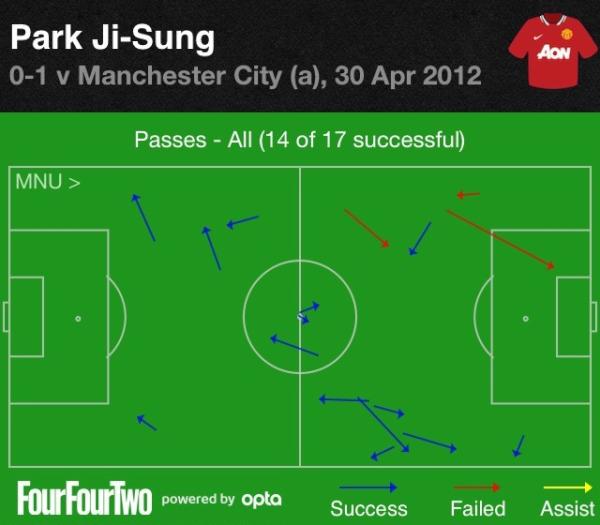 SAF came to the Etihad with a passive formation. He set up deep with Nani and Giggs doubling up with Evra and Jones to try and close out the space for City. To be fair to us, it was a tactic that was working. That is, of course, until Kompany powered a header past De Gea after Smalling let him get space right before half time. From that point on, you knew that United had to fix up or go home and we seemingly decided on the latter.

What was SAF thinking? This United team, and no team in the Premier League for that matter, has the squad capable of containing City. The attacking prowess of Silva, Tevez, Aguero, Nasri and Toure is too much for any team to try and stifle, especially a team that isn’t renowned for their ability to close out the space in the midfield with energy and tenacity.

If we were to have any chance of coming out of the Etihad without our tail between our legs, we simply had to play to our strengths. We had not got to this point of the season through our strength in holding teams out. Our dangerous width has always been our biggest threat but we set up compact and shot ourselves in the foot in the process. We never carried an attacking threat and it was only when Danny Welbeck came on that we had a sniff at the City goal.

The bitter disappointment I taste from the defeat is not the fact that City have overturned an eight point gap at the top but it is from the manner in which we responded after going a goal down, or didn’t for that matter. The United of old has always reared its head in the face of defeat but, in contrast, we almost welcomed it against City. Zero shots on target over 90 minutes typified that. Rooney struggled with Nani and Giggs providing little to no support on the wings and we had no output up front.

I know it is not right to single out a performance considering how poorly everybody played but Phil Jones, you should of stayed in bed. He was out of his depth whenever called upon. From poor positioning and mistimed tackles to an underwhelming array of crosses that culminated in United’s best chances being wasted before they emerged, Phil really let himself down tonight. I do think it was the right move to drop Rafael after his performance against Everton but Phil was not the right choice, Valencia would of potentially been a better choice.

He might not have made the right choice with the line-up tonight but SAF is right. Although City do now have the title in their hands with only two games remaining, they face a tough test away to Champions League chasing Newcastle on Sunday. I would absolutely love it if Newcastle could stop City from winning and I am sure Kevin Keegan would too.

This season has not seen a classy United tear apart opposition limb from limb and walk over the competition. It has seen us holding onto City’s high flying tail and waiting, like a lion in the grass, for them to slip up. They did, and we pounced. However, with only four points from the last nine available, we have fallen by the wayside at the critical time.

This was always going to be a troubling season with City’s money buying an incredible squad and looking at the season as a whole, few can argue that City have earned their position at the top of the league. That, however, doesn’t make it any easier to see the blue side of Manchester edge closer to what could be a power switching title.