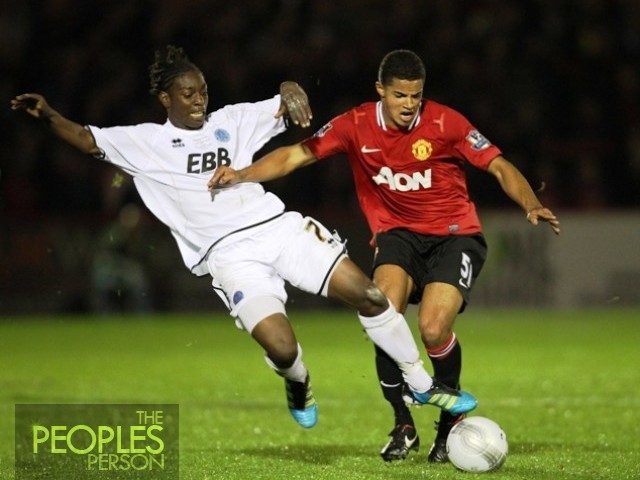 It has come to light this evening that Zeki Fryers has left Manchester United in favour of Tottenham Hotspur. Fryers will become the third youth prospect to leave Manchester United within the last 12 months. Ravel Morrison was the first, who left for West Ham United under complete different circumstances, the second was Paul Pogba, who was understood to make his switch to Juventus some weeks back, and now Fryers.

Towards the end of last season, there were rumours of Fryers not signing a new contract with the Red Devils, which was never reported again. The player nor his agent mentioned a move away from Old Trafford, or whether a new contract was going to be signed. Stewart Gardner of MUTV interviewed Sir Alex Ferguson on Tuesday morning and one of the questions asked was about Pogba and Fryers. The gaffer said, “Pogba signed for Juventus a long time ago as far as we’re aware, it’s disappointing. I don’t think he showed us any respect at all. To be honest, if they carry on that way, they’re probably better doing it away from us.”

It would seem that the player had not even told the club he was going to leave, which is not very respectful. The club have done nothing but help nurture his talent, and for the way he seems to be acting, would make anyone think Manchester United, the players or the staff, had done something to upset him.

Fryers made a total on six appearances for the Manchester United first team in the last two seasons. At only 19-years-old, he did show some talent, but also needed to perfect his style of play, so he could make his mark in the first team on a permanent basis. He certainly did look like he was going to make the high-grade Manchester United expect from their players.

I don’t know what is going on with the youth at the club, but after three talented players within 12 months, you have to ask questions. I don’t think the club is doing anything wrong, as they have many youngsters on the books, and they seem to be happy. Perhaps its something to do with the players agents, or someone else telling them that they will be better off elsewhere, perhaps I am completely wrong.

The England U19 international has apparently signed a contract worth £20,000 per week with the White Hart Lane based club. It is also suggested that Manchester United did not meet Fryers wage demands, which is unknown to be true and just rumoured at this present time. Fryers has been promised first-team football with Tottenham, but whether this was promised before or after Harry Redknapp left as manager is unknown.

Once the departure has been confirmed by Manchester United, they will almost certainly need to bolster the left-back position now Fabio has gone on loan to Queens Park Rangers. It will leave the Red Devils with one experienced left-back in Patrice Evra. Leighton Baines seems to be on the club’s radar, but perhaps this will make Sir Alex Ferguson look at other targets as the club would not want a player like Evra to get injured, with no able cover.