Away days: Olympiacos – The James Joyce Brigade take over Athens

Athens was an amazing trip. Ours actually started on Saturday morning when we met at a German pub in London for the Crystal Palace game. After checking in at a hotel at Heathrow Terminal 5 on Sunday night with a few other reds, Stuart, Alun and Carl.

We were up bright and early on the Monday morning for a 7.55am flight. On the flight, we bumped into quite a few familiar faces in Chris, Kieran and his Brummie crew. The flight was full of United fans and we literally drank the flight dry as there was no booze left after two hours!

When we landed in Athens, we knew it wasn’t the nicest of places and immediately realised the impact that the recent economic issues had actually had.

We caught a metro direct to a stop called Thissio. Chris came to pick us up and we met a few friends at the James Joyce Irish Pub including Ryan, Joe and Irah. Similar to the flight, this was full of reds – after stopping here for a few swift pints, four of us went to check into our hotel and freshen up.

Three or so hours later, we were back at the James Joyce and there was a nice buzz building around the place. We got our flags up and it literally became party central in the hours that followed. Amazing scenes. Around 100 reds singing the calypso, inside and out, beer flying around, people dancing on wheelie bins, on top of the bar, tables, you name it. We partied the night away until the early hours with the likes of Simon, Matt, Dunny, Mel and many others. 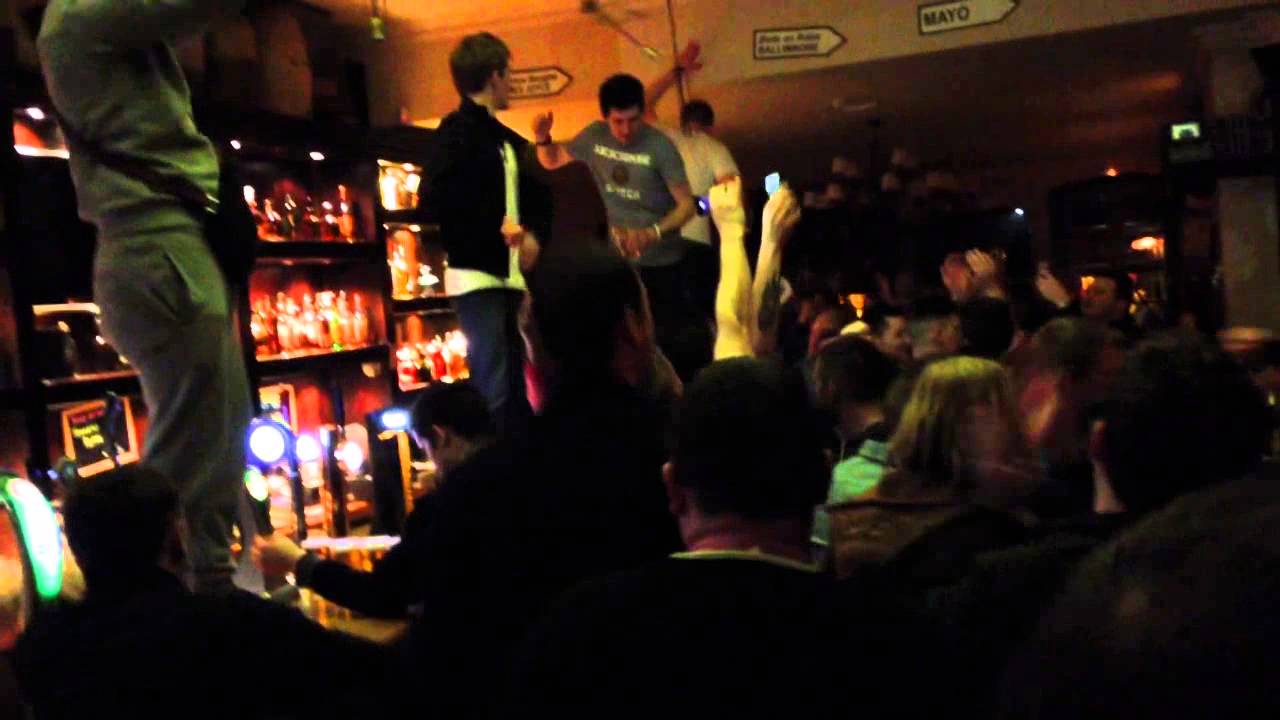 This is what being a Manchester United fan was all about. Not the silly bickering, fighting and demands for instant success seen on Twitter lately. After an eventful evening (where the local lager was drunk dry), we trekked back to our hotel for a few hours of well deserved kip.

The next day (match day) we got up and ready and headed over to the collection point which was around ten minutes by car. Once again, there were familiar faces galore and United fans were in various pubs on a junction of four roads.

As this was a short stop away from the local metro, stream after stream of United supporters were coming in as various flights were landing at the airport. After drinking here for the next two to three hours, we headed back to our hotel to drop our passports off and had a few more drinks. Our personal party, which was now 15-20 strong, was warmed up nicely for the match ahead.

After a great day and a great result at Crystal Palace on the weekend, we were optimistic but were also aware of Olympiacos’ home and league form. Based on our season, we weren’t expecting too much but were hopeful of a performance at the very least. At this point, we’d had a few and were going to sing our socks off and back the team regardless regardless.

We avoided the local metro and got a short taxi to the ground. We were advised by locals that the Olympiacos fans can be nasty when they fancy it so, being beered up, we made what was probably the right choice. Once we got near the ground, we kept a fairly low profile and didn’t get much more than the normal verbal abuse that can be expected. Facilities at the ground were basic at best but that’s hardly the priority. Once inside. we did the usual and ignored our allocated seats and went as a group to a small narrow area which had a perspex front on it.

What followed was a pretty dire performance. On our part though, we sung our hearts out in an attempt to get the atmosphere going in our area which was partly successful. Our support in general was decent but was overshadowed by the 26,000 Olympiacos supporters who were in no mood to back down.

If only Old Trafford could be like that but that’s a separate discussion.

United We Stand polled its readers and discovered that there was a marked decline in tolerance after the defeat in Greece. At the end of January, just 22 per cent of those polled thought the manager should be dismissed; by the end of February that percentage had swollen to 55.98 per cent.

After the game ended we were held in for around 30 minutes. During this time Keane, Chiles and Dixon were pitch side. This time, 90% of the away end was in full voice, singing various songs directed at those three. I personally loved every second of the tributes to Keano – make what you want of him but what he did for our club was legendary.

After finally leaving the ground, we were back on the metro and it was two stops back to Thissio to a pub near the James Joyce (which strangely enough didn’t let us in!).

The mood in general was a happy one but that was the beer at work. There was an underlying sense of massive disappointment and feeling slightly short-changed.

Is this what was becoming of the champions of England?

From strolling to a 20th league title to getting utterly outplayed by the mighty Olympiacos without so much as remotely looking like scoring? Of course, this wasn’t a one-off and it was an all too familiar feeling. I can probably say that those 90 minutes in Greece summed up our season.

After drinking our sorrows away and singing to the early hours, we managed to struggle out of bed with all eyes on home and a well-deserved rest. The last day consisted of a trip up to the Acropolis which was an absolutely awe-inspiring place and a somewhat civilised lunch in town. From here, it was onto the metro again and towards the airport.

That party at James Joyce will go down in history, meeting good mates over there, making new ones and of course ticking another country off the list as well as a Chinese takeaway (we’ll leave it at that) are all just a few of the many highlights on this trip.

Sadly the result, and United’s performance, were not.