When John O’Shea silenced the Kop…

It’s said that heroes often come in unlikely forms and on 3 March 2007, never has a truer word been uttered.

United had been on the back foot for most of the game but fought their way to the 89th minute with parity intact, minus the dismissed Paul Scholes who was sent off for the sort of attempted slap of which your Auntie Sandra would be ashamed.

As Liverpool pressed for a late winner, United broke and won a free-kick on the left-hand side of the penalty area, metres from an enraged and baying Kop. The clock tick-tocked past the ninety minute mark. Hero time.

Ronaldo fired in low and hard, sending Pepe Reina sprawling left. Be it the presence of Louis Saha or the invisible force of narrative fate, the Spaniard conspired to spill the ball. Heads turned, mouths widened. One person reacted before than the rest.

Right place, right time. Wrong man, perhaps, but a hero was born. O’Shea calmly stroked the loose ball into the roof of the net.

His celebration was one of pure emotion. The full length of the Anfield green was covered, a jubilant Rio Ferdinand in tow. Reds in white went wild, Gary Neville thrusting himself into the welcoming safe hands of Edwin van der Sar.

The win put United twelve points clear. BBC Radio 5 live later claimed that United were now certainties to win the league title – their first in four long years – saying the win was the ‘defining moment’ of the season. How right they were. 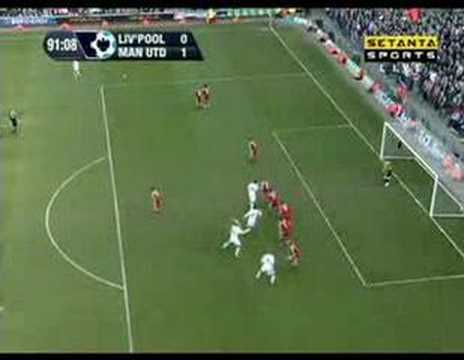 Many people point to the game against Fulham where Ronaldo scored a late winner as the pivotal moment in the 2007 season but if that was important, then the three points against Liverpool were pivotal.

United had been on a typical good run since the turn of the year and the game against Liverpool just had that ‘feeling’ about it. If United won it, the title felt inevitable after a barren run of three years without it. It was a huge game. To win at Anfield, in the circumstances that United did showed all the hallmarks of champions, and so it proved.

United weren’t playing very well and Scholes had been sent off. Could it be that a stupid red card led to United throwing the game away, and with it the potential demise of our title hopes? No. John O’Shea had won it at the death. O’Shea!

The team had done it, in typical United fashion, against our ultimate rivals, and at a really important time in the season. It was huge. The rest, as they say, is history.