At kick off on 5 May 1999 at Anfield, Manchester United were a point behind league leaders Arsenal having played a game less.  The Reds were two weeks away from an FA Cup final and three from a European Cup final.  The Treble was on. We were on the very edge of something amazing and unique, and nerves were humming like a tuning fork with anticipation and excitement.

On the other hand, Liverpool were dog-paddling away at eighth in the table and had a poor record at home.  The likes of Derby County had done the double over Liverpool.

A stranger to the rivalry could be forgiven for assuming that a full strength, high-flying United team (missing only Giggs and Berg on the day) would be at least slight favourites. But this was Liverpool.  Everything intelligent in the way of an assumption goes out the window when it’s Liverpool.

With nothing else to play for, they had this – the opportunity to deny United a shot at the Treble.  To add to the dramatic narrative, Liverpool were captained that day by former Manchester United midfielder Paul Ince, a man with an agenda.  An agenda with one item on it – Alex Ferguson.

David Elleray was the referee – he of the dubious penalty during the previous season’s Anfield meeting in December 1997.  The same Mr. Elleray who was so fond of doling out cards to United players that Roy Keane once said of him: “He should just book me in the tunnel and save time.”

From the whistle, Liverpool were quick and aggressive.  Tackles flew in but as the first half ticked by,  it was a calm United who began to assert control.  Then Roy Keane opened up the Liverpool defence,  pinged a back and forth with David Beckham, who aimed an exocet missile right at Dwight Yorke’s head on the far post.  There you go, Yorkie.  Cheers Becks. 1-0 United. 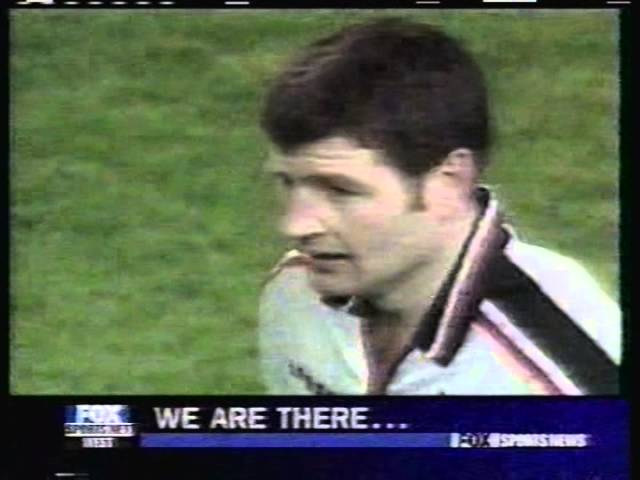 In the second half, Jamie Carragher fouled Jesper Blomqvist in the box (well, ‘foul’ would be a generous term for what was actually an attempt at removing Jesper’s liver with his studs).  As poor Jesper writhed on the turf for it seemed an eternity, Mr. Elleray pointed to the spot.  Hurrah.  As the players gathered around for the penalty, Keane said something uncomplimentary to Carragher and there was some jostling and pushing as the Liverpool players took exception to Roy’s evaluation of their young defender.

Jamie Redknapp insinuated himself into the situation, Keane told him in no uncertain terms to sling his hook. Paul Ince grabbed Roy’s shirt in his fist by way of telling him he shouldn’t talk to Jamie  that way and Roy’s shirt ended up ripping right down the front.  Amid the excitement, Denis Irwin had to prepare to take the penalty.

Good old reliable Denis. His kick was hard and true, although Friedel nearly got a glove to it. 2-0. Now Liverpool had to go for it.

As they swept forward in numbers, Leonhardsen stormed into the box.  Blomqvist made a neat sweep of the leg to rid him of the ball, Leonhardsen sprawled on his knees on the pitch. Then…Mr. Elleray pointed to the spot. What? Redknapp ceased poncing about long enough to smash it home. 1-2.

Then a second dose of injustice, thanks again to Mr. Elleray. With 15 minutes left, Carragher and Irwin were jostling for the ball, Denis played it down the line a split second after a whistle which he didn’t hear in the noise from the Anfield crowd.  Incredibly,  Elleray went to his pocket, flashed yellow and sent Denis off for a second bookable offence.

(Irwin would miss the FA Cup final. Why did the dramatic sub-plots of 1998/99 all involve my favourite players – Irwin, Keane, Scholes – missing cup finals? Heartbreaking!)

Even with ten men, United didn’t stagger.  They played possession football but the lads were physically and mentally tired. Then the inevitable happened. After 88 minutes, as Schmeichel went wandering in a six yard box scramble, Paul Ince equalised into an open net. 2-2.

Ince went absolutely *mental* in his celebrations.  (It was a bit  frightening actually. The man had obviously been suffering in a world of pain.)

It would be difficult to say who frothed with vindicated resentment more – Paul Ince or the Kop.  To this day, the details of Ince’s celebration are remembered in vivid technicolour by many Reds who will never ever forgive him for oh so nearly denying the Reds the Treble. Because those two dropped points hurt. Because we didn’t know yet. We didn’t know what was going to happen by the end of May 1999.

It was grim in the aftermath. Fergie fumed. Actually,  he was apoplectic. The injustice of the decisions and their impact on the outcome of course but with so much at stake, and at Anfield,  and from being two goals up, and because of Ince. It was like a rusty knife twisted in the gut and then acid poured on the open wound.

The Gunners were laughing. The pendulum had swung Arsenal’s way at precisely the right time. They were in excellent form, they had just won at Spurs, their local rivals.  They were three points ahead of United, had played a game more, and possessed a better goal difference.  It was going down to the final day.

The rest is history.