In a season full of peaks and troughs, Manchester United’s 3-0 defeat to Liverpool was the bottom of the barrel, the ultimate low.

There’s no shame in defeat, it is part of football, but there is when that defeat comes against your bitter rivals after a performance which showed zero fight and passion. The only people who seemed to care about the result were the fans.

However, there is one thing that is worse than United’s football this season – Moyes’ approach to the media. All season, he has been saying things that have left United fans’ with their face buried in their hands and this weekend, he has done it all again.

Speaking after the Liverpool game, he said: “It was a game littered with penalty kicks and decisions – some were right and some were wrong. It was a tough day for us.

“At half-time we were 1-0 down to a penalty kick, I didn’t think there was much in it. To give away one 20 seconds or so into the second half it made it a real upward climb for us after that.”

There wasn’t much in it? What game was Moyes watching?

Liverpool were all over Manchester United and deserved the lead. We fathomed one shot on target in the whole game for crying out loud.

You can imagine how Moyes’ half-time speech went: “You played well lads but a decision is the only reason we’re losing, pick it up. Glory glory Man United”. Why does Moyes persist in lying to himself and the fans?

Here’s Moyes talking about United only winning once against clubs in the top nine:

“That tells you we’re not doing as well as we should be. We have to play better and make ourselves harder to beat, harder to play against and we are also going to have to make sure we are creating and taking more opportunities.”

Moyes targets for @ManUtd vs Olympiacos: “They say we have to win by three goals, but we only have to win 2-0 to get into extra-time" #MUFC

No, no, no. Moyes is thinking about extra time before the game kicks off? He should be thinking about scoring four, five or six goals against an average Greek side at home. We’re United, not Everton.

United fans have been backed into a corner by Moyes and the optimism that flowed after the West Brom win has been drained by the Liverpool performance. Outside the stadium for Full Time Devils, Ray sums it up perfectly. 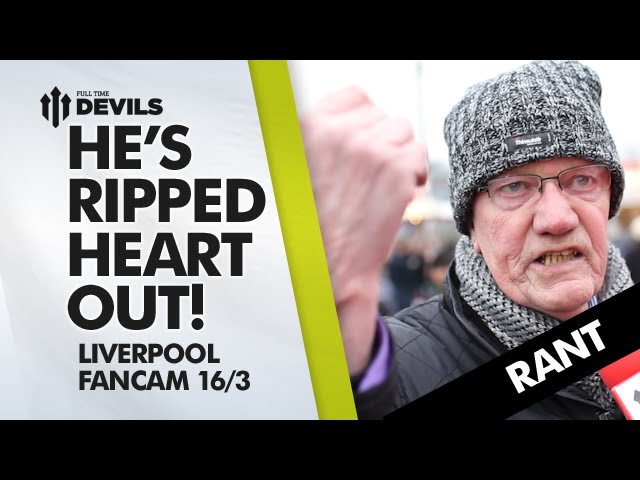