‘Bebe the goalscoring machine’ is a turn of phrase nobody would have ever expected to utter.

However, Manchester United’s homeless hero has now garnered a more than impressive eight goals in his last 11 appearances on loan at Pacos de Ferreira and he is line to be nominated for Portugal’s Young Player of the Year Award.

Yes, we are talking about the same Bebe who couldn’t hit a barn door from six yards in a Manchester United shirt:

What a difference a loan spell can make to a player.

Back in Portugal, Bebe enjoyed an average spell at Rio Ave last year but this season, he has made a miraculous turnaround in becoming one of Portugal’s most in-form players.

Bébé has scored eight goals on loan this season. He's among the favourites to be named Portugal's young player of the year. Genuinely. #mufc

Haven’t seen any of the goals he has scored? 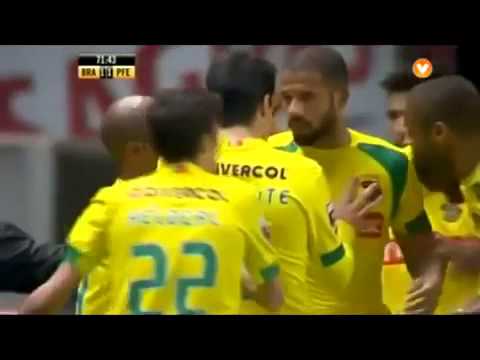 When Bebe arrived in Manchester, he was as raw as players get – power and pace were in abundance but equally so was a startling lack of control and technique. He made Happy Gilmore look cultured.

However, David Moyes simply can’t ignore the season he has had out in Portugal. If any of those goals had been scored in the Premier League, they’d be goal of the season contenders and he could be rewarded by being named the Young Player of the Season.

Bebe himself is keen to get another chance at Old Trafford but admitted nobody has spoken to him since Moyes took over.

“I still hope to return to Manchester United, but nobody from the club has spoken to me,” Bebe said according to Sky Sports.

“I am in good form and I hope to remain this way.”

Will Bebe turn into the new Ronaldo we hoped he would? No, probably not, but he has certainly merited another chance to prove his worth at Manchester United.