Shinji Kagawa and Juan Mata are a match made in heaven

By Defending With The Ball

Juan Mata: “It is a pleasure to play with Shinji, we connect very well.”

Robin van Persie‘s injury has been a sort of blessing in disguise for Shinji Kagawa who has excelled in recent weeks playing in a more dynamic Manchester United system. During his time at Borussia Dortmund, Kagawa forged an impressive midfield trio with Kuba and Gotze behind Lewandowski, and signs are his newly found partnership with Mata could be equally as impressive, if not better.

Firstly, Kagawa is a very tactically astute player, key at finding and exploiting spaces between the opposition defence and midfield lines and in the half spaces, which is simply the vertical space between fullback and centre-back.

David Moyes started the season playing a very rigid 4-4-2 formation with both strikers playing very high and Kagawa playing wide hugging the touchline. With both strikers that high, Shinji had problems interchanging and finding them because of their high positioning and was often left stranded on the flank with his only option to them being a cross.

According to stats, United had played the most long balls, made the most crosses and had the least attacks channelled through central zones, which sums up United’s system at the back end of 2013. It’s no surprise Kagawa failed to influence in an attacking sense with zero goals, zero assists and only five chances created – before Mata’s arrival.

The signing of Mata has added a lot to United’s play as expected. Since his signing, United have channeled a fair bit of their attacks down the central zones (apart from the Fulham game, who to be fair, sat extremely deep) and have been able to play more expansively.

One man who has benefited most from this signing is Kagawa.

Shinji and Mata share very common qualities. Both are world class playmakers, they can serve as a good link between midfield and attack, can spot a gap in defence and most importantly, can exploit it.

First signs of this impressive partnership came in United’s away trip to West Ham. Their combination play, appreciation of space, interchanging and movement in midfield to create passing angles proved chaotic for the Hammers.

Mata and Kagawa quickly adopted some sort of telepathic understanding of each other’s games and were often very close to each other. They worked in tandem and were at the heart of all United’s terrific midfield play constantly providing angles to teammates for a passing option.

They kept United ticking in midfield and also proved key in their attacking transitions.

In the above screenshot, Mata makes a beautiful diagonal run behind West Ham’s defence and Kagawa plays him through on goal. Almost reciprocally, Kagawa made a beautiful off the ball run moments later and Mata on the ball is able to play him in behind the West Ham rearguard.

In the home game against Villa with Van Persie out injured, Moyes maintained the 4-2-3-1 system he used against West Brom and West Ham after he had ditched it to a conservative 4-3-3 against Manchester City.

Kagawa maintained his position on the inside left wing position with Mata playing behind Rooney and Young as the outlet, providing width in the system.

After Villa took the lead, Moyes barked out a few instructions and tweaked his formation a bit. Kagawa who had started wide moved a little bit infield, with Buttner providing much of the width on the left flank.

This proved to be the turning point as United involved Kagawa more in build-up combining neatly with Mata and changing the dynamics of United’s attack.

Take Kagawa’s assist to Rooney for example. To most, it was a simple cross from Kagawa to Rooney to head home but let’s complicate it a bit. 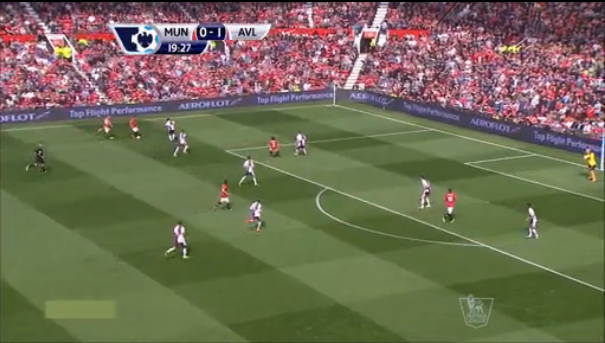 Buttner’s overlaps takes the attention of Bacuna, Villa’s right-back, and Kagawa on the ball has time and space to deliver the cross. Initially, Villa’s defenders take up good positions and shouldn’t have difficulty dealing with the ball. 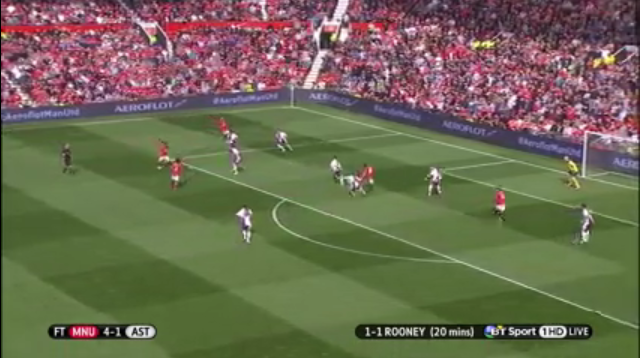 However, Mata makes a very good run off the ball to pull Villa’s defenders towards him. Kagawa’s vision then allows him to spot Rooney in space and deliver the cross.

Also for the second goal, Mata makes a good run off the ball into space and his movement allows Kagawa the chance to thread the ball through the tiny space available into his path. 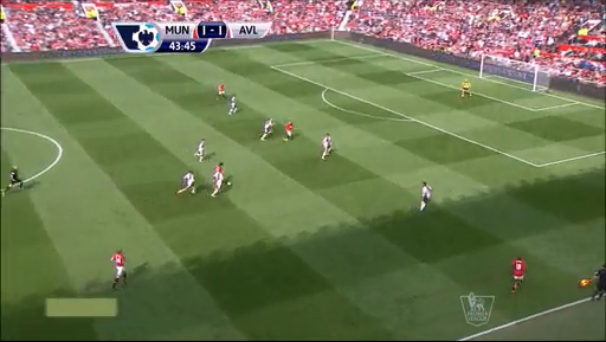 It’s no surprise that since Mata’s arrival has brought a significant rise in Kagawa’s performances.

Before the West Ham game, Shinji had created only five chances all season and had no goal or assist to his name. During his first game with the Spaniard, he created an impressive four chances and provided his first assist of the season the following week.

The continued absence of Van Persie will give Moyes the chance to continue to experiment with these two talented playmakers who, as of now, have changed the dynamics of United’s attacks.