Aston started in England’s opening 2-0 win over Chile but defeats to USA and group winners Spain meant the latter were the only country to qualify for the final round.

Left back/centre forward Aston made his 17th and final cap for his country during the tournament and four years later retired altogether after making 284 appearances for the Reds in the years following the war, having scored 30 times.

In 1969, he returned to Old Trafford as Chief Scout under new manager Wilf McGuinness and held the position for three years before being sacked along with McGuinness’s successor, Frank O’Farrell.

Also part of the England squad was left-half Henry Cockburn who played 243 times for United. The 28-year-old failed to start any of the three matches but did make a couple of substitute appearances before retiring from international football a year later and with one less cap than Aston.

Once again, United had two representatives playing for England at the 1954 World Cup. This time it was Roger Byrne and Tommy Taylor. Allenby Chilton was named as a reserve and would have only travelled if he was needed but the call never came.

Byrne and Taylor started both group games as England qualified for the quarter-finals as group winners. They first drew with Belgium 4-4 AET before defeating Switzerland 2-0, much to the dismay of the home fans.

Their tournament was to end at the next phase and, with Taylor dropped to the bench, England lost 4-2 to two-time winners Uruguay. 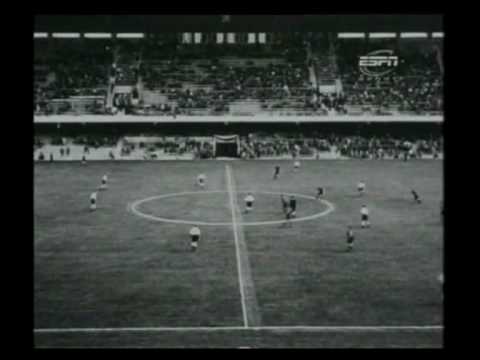 Whilst not playing for United at the time, nor ever doing so, future manager in the 1970s Tommy Docherty appeared for Scotland as they headed home losing both games, the last of which was a 7-0 defeat to England’s eventual South American adversary.

Little were Byrne and Taylor to know that cruel circumstances occurring in February of 1958, their appearance at the World Cup four years before would be their first, and ultimately last.

The Munich Air Disaster took the lives of eight United players, seven of whom were Englishmen including 21 year-old Duncan Edwards and 22 year-old David Pegg, who were likely to replace Billy Wright and Tom Finney respectively in the England set-up for the World Cup and beyond.

One player who did make it to Sweden was Bobby Charlton who, following the crash, suffered an enormous amount of guilt before playing once again the following month.

However the forward did not kick a ball as England were knocked out in a playoff against the Soviet Union.

Next up, we take a look at Manchester United’s World Cup players in the 1960s.