Why Paddy McNair should start ahead of Chris Smalling against Arsenal

With so many injuries, the squad has been depleted to the point where Luke Shaw is currently our most experienced available defender in terms of minutes played this season with just 521 minutes of football. 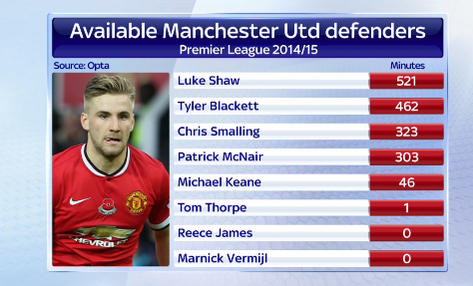 Marcos Rojo, Jonny Evans, Phil Jones and Rafael are all injured but Chris Smalling has returned after his suspension following a red card against Manchester City.

However, despite Smalling returning to the squad, there’s not a chance he should start instead of Paddy McNair. Not because of his actions at the Etihad but simply due to the fact McNair deserves to start.

The Northern Irishman has been outstanding for United and is yet to let the side down. The three games McNair has started resulted in three wins for United against West Ham, Everton and Crystal Palace.

McNair was thrown in the deep end against West Ham and swam, followed it up with an even better performance up against Romelu Lukaku and continued that with a consummate game against Crystal Palace. On form, he’s probably United’s current first choice centre-back.

Whether McNair does get his deserved start against Arsenal has a few variables. If Evans or Jones are fit, Van Gaal is going to more than likely opt to start either of them for experience at the back.

In that same regard, Smalling could get the nod but with Tyler Blackett the only left-footed centre-back who is available, it might be time for Van Gaal to break his rigid tradition of playing alternate footed centre-backs together.

Smalling may well start against Arsenal with so many options available but Van Gaal should make sure it isn’t at the expense of McNair.