Much was said about Manchester United losing their identity when Danny Welbeck left Old Trafford on deadline day. What wasn’t mentioned was that emerging defender Tyler Blackett, 19, had started all three of the team’s games up to that point.

Yesterday, Blackett returned to the starting XI for the first time since his red card at Leicester, facing up to the former reds striker.

The England U21 international took to Instagram after the game to celebrate his side’s victory but it was evident it meant a lot to the Manchester-born player to be involved in a game he’d grown up around.

The group celebration after Wayne Rooney‘s goal put the visitors 2-0 up was a popular theme among players and supporters after the match across social media and the returning Blackett joined in the fun, referencing the battles he’d watched growing up including former United captain Roy Keane and Patrick Vieira. 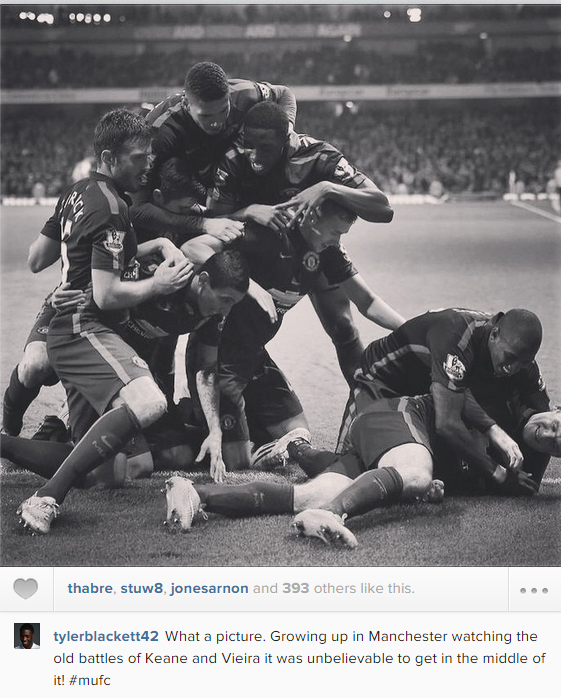 Blackett played alongside another young defender in Patrick McNair, the Northern Irishman making his fifth Premier League appearance of the season with 18-year James Wilson once again appearing off the bench.

Louis van Gaal has given every chance to youth this season and today Blackett and co. rewarded their manager’s faith with strong performances as they stifled a front three consisting of Welbeck, the in-form Alexis Sanchez and Alex Oxlade-Chamberlain.