The Peoples Person is going to be bringing you a new series in the build-up to every away game for Manchester United from now on – Away Day anecdotes.

We speak to fans who were in the away end for some of United’s most memorable moments and with a trip to Villa Park this weekend, it’s a perfect place to start.

First up, we remember Paul Scholes’ volley from 2006 which crashed in off the underside of the crossbar. 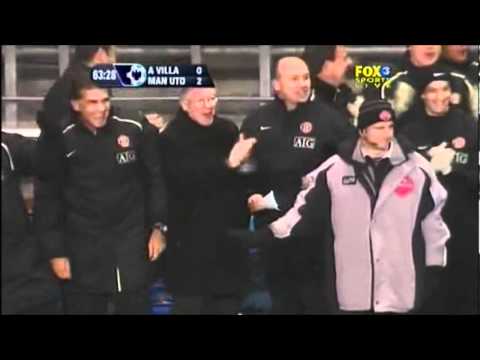 We spoke to Harry who was at the game with his dad and brother.

What do you remember of the game in the build-up to the goal?

Not too much. Ronaldo scored a cracking goal for the first and I just remember the ball feeling like it was in the air for ages and it being very quiet as everyone knew what Scholes had in his locker. My dad was there for the Bradford game and was nudging me as the ball was dropping.

Describe the scenes in the away end when Paul Scholes’ thunderbolt went in.

One word and one word only: pandemonium!

I think I ended up three rows down going mad with my old man. It was one of those moments why we fall in love with football. There was lots of strangers hugging each other trying to figure out what they had just witnessed. It was hard to see straight away if it had gone in from our view but soon as the net bulged the madness began.

Surely even the Villa fans were clapping for the goal…

I was too busy celebrating and picking my jaw off the floor to realise.

What was the funniest thing you saw in the away end on that day?

Paddy Evra’s celebration for the goal always sticks in my mind but there were a few people who ended up on the arse covered in pies. Chicken Balti at villa park is always a winner.

We’ll also be taking a look at Ryan Giggs’ wonder-goal from 1999 and Javier Hernandez’s goal which sealed a 3-2 turnaround back in 2012.

Are there any other moments you’d like to talk about? Send an email to [email protected]