A formation which Louis van Gaal hasn’t used much this season is 4-3-3.

Traditionally his favoured choice of formation at Barcelona and Bayern Munich, teams lined up using a normal 4-3-3 were focused on fast, quick attacking with pace and width – two attributes you certainly couldn’t attach to Man United’s current performances.

With that in mind, a home game against Leicester seems like the perfect opportunity to go more expansive. With Daley Blind holding the midfield together, Wayne Rooney and Ander Herrera are able to dictate the play ahead of them.

Angel di Maria and Adnan Januzaj out on the wings would give United some fantastic width and, more importantly, pace. Overlapping runs from Luke Shaw and Rafael would give them space to cut inside as well.

Van Gaal seems set on 3-5-2 being United’s most balanced formation and while he may be right in that United are tight at the back using those tactics, a home game against Leicester should be where United exert some dominance as the heavy home favourites. 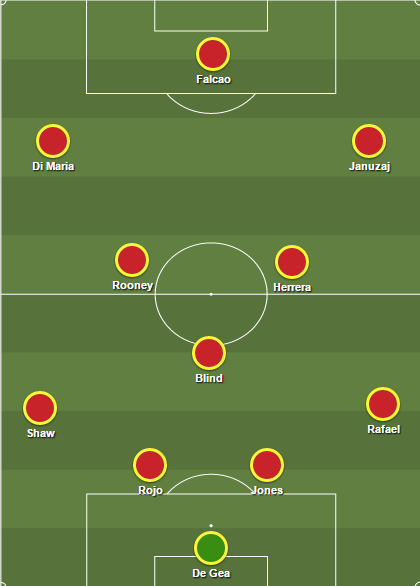