Louis van Gaal will expect Manchester United’s game against West Ham this weekend to be a battle.

Sam Allardyce’s side is renowned for taking a physical approach and it’s likely to be a tough away for Van Gaal’s side. With that in mind, this 3-5-2 formation would give Man United the best possible chance of squaring up to West Ham.

A tall back five consisting of Rojo, Evans, Jones, Smalling and McNair would give Man United plenty of height when it comes to set pieces, an area which has been a big weakness for United all season, least not against a team like West Ham who are so strong on them.

Fellaini partnering Rooney in midfield would provide some bite and a strike partnership of Van Persie and Falcao is the biggest presence Van Gaal could get. Falcao’s hold-up play would be crucial in this formation in order to let McNair and Rojo overlap.

However, the emphasis on having a physical presence in this line-up might not provide the balance Van Gaal always craves. 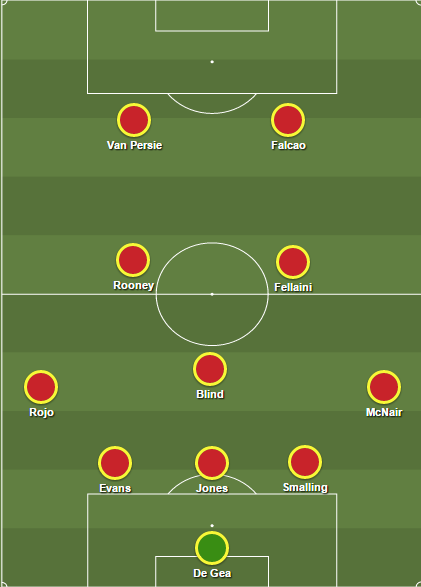