Man United vs Arsenal: Potential 4-2-3-1 with Blind, Carrick and Herrera

Louis van Gaal has used more formations and different line-ups this season than he has had hot dinners, which makes it all the more difficult to guess what team he will line-up with every week.

The return of Michael Carrick also throws a spanner into the works ahead of the Arsenal game on Monday and if he is fit, Louis van Gaal will want to get him straight back into the starting XI.

That being said, Daley Blind has been in good form. Does van Gaal drop Blind to accommodate Carrick or is there a way both can play?

We’ve drawn up this potential 4-2-3-1 formation which allows for Carrick and Blind to both play in the holding role with Herrera just in front of them in the no.10 role. It’s a midfield trio which has never been used before but in a match where the midfield will be packed, it could give United much better defensive protection.

With Ashley Young, Wayne Rooney and Angel di Maria in attack, United would have blistering pace on the counter-attack too. 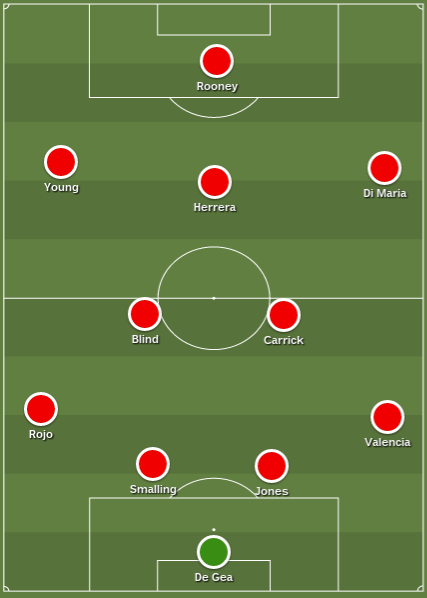 Manchester United fans given hope despite poor result vs Arsenal

Aaron Wan-Bissaka on fire despite drab draw with Arsenal

Manchester United failed to beat Arsenal for this reason