The 21-year-old recently favourited a tweet which contained a report linking him with a move to Old Trafford, sparking speculation over where his future lies.

Depay would certainly enjoy linking up with van Gaal if Hugo Borst’s comments are anything to go by. The author, responsible for writing Louis van Gaal‘s biography, elaborated on Depay’s relationship with United’s boss and said the 21-year-old considers van Gaal as a ‘father figure’.

Speaking about Depay in van Gaal’s biography, Borst said: ”I hope that one day Memphis gets to play under Louis’ tutelage again.

“A reunion with his non-biological father would be a blessing. A petulant lad, Memphis is in need of a searching gaze and a gruff commanding voice.

“I swear, half a season with Louis as his manager and Memphis will be striding onto the pitch proudly wearing the name van Gaal on the back of his shirt.” 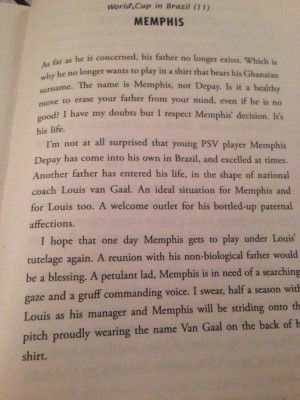 Depay has enjoyed a fine season at PSV having scored 19 goals in 28 appearances at the age of just 21. The Eredivisie might not be the toughest league in the world but they are still some superb numbers from him.

Van Gaal has employed a 4-2-3-1 formation in recent games and Depay would slot right in on the wing in that system should he join the club. With Angel di Maria on the other side, United would finally pose a threat down the flanks.

Depay’s relationship with van Gaal would certainly give United the edge on other clubs when it comes to securing his signature.

David de Gea being offered to clubs as...