It is important that Manchester United fans do not get too carried away with the club’s 3-0 win against Tottenham Hotspur last weekend.

Yes, Man United were superb and more than deserved their win, but the team had been poor for a number of weeks prior to the game.

Talk of overtaking Manchester City to finish the season second in the Premier League is premature and Louis van Gaal should just be focused on fourth at a minimum.

It is vital that United take something away from their trip to Anfield to face Liverpool so the Dutchman may opt for a defensive line up on Sunday.

Fans will not be happy about it but Wayne Rooney may drop into midfield once again to pressure Liverpool’s players whilst making pacy supporting runs on the counter attack.

Meanwhile, Marouane Fellaini could start in a defensive midfield position in order to get amongst it and make himself even more of a nuisance than he already does.

This means Radamel Falcao will be given the huge task of leading United from the front. The Colombian has had a tough time at Old Trafford but fans would forgive him for his poor loan spell if he were to grab a winner against Liverpool. 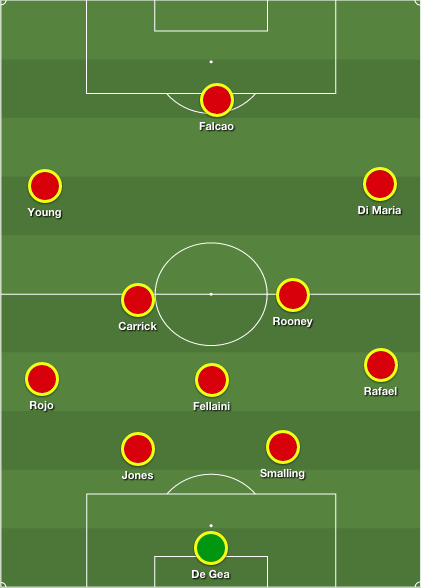 What do you think of this starting XI? Leave your comments below…
Best XILiverpoolMarouane FellainiRadamel FalcaoWayne Rooney
FacebookTwitterWhatsappEmail