Marcos Rojo has teased Manchester United fans about the potential signing of Nicolas Otamendi with another not-so-subtle message on Twitter.

The Man United defender is away with Otamendi on international duty with Argentina for the upcoming Copa America tournament this summer.

Previously, Rojo favourited a tweet encouraging Otamendi to move to United and, despite all the reaction to it, has once again done something very similar.

Now, Rojo has favourited another tweet from Man United fans asking whether Otamendi will line up alongside him which has once again got tongues wagging: 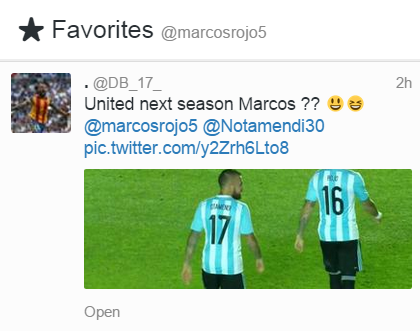 Social media is a game and Rojo knows exactly how to play it.

He’s doing a good job of it so far by encouraging United fans to message him about Otamendi and that will, in turn, be seen by the Valencia centre-back.

Whether it actually resonates on any level is another matter altogether but Rojo is certainly doing his best to push the idea of a move, although I’m sure actually talking with Otamendi about is a far more practical and realistic way of going about it.