Timothy Fosu-Mensah: Insight into how his first season at Man United went and why he can become a first-team star

In the latest of our chats with Ian Brunton (@ManUtdReserves), we discuss Timothy-Fosu Mensah and how he has got on in his first year at Manchester United having joined from Ajax.

What were you first impressions of Timothy Fosu-Mensah when he arrived in Manchester from Ajax this past summer?

We actually had quite a long wait to see him in action as it took months for his international clearance to come through so it wasn’t until mid November, away at Everton, that he made his U18s debut.

Every now and again we get to see a player who makes an instant impression the first time that player is seen in action. Players like Morrison, Pogba, Januzaj and Wilson in recent seasons and so it was, for me at least, with Fosu-Mensah.

He looked so composed with the ball at his feet, never rushed and although United got well beaten that day, Fosu-Mensah really did stand out as he dominated his area of the pitch.

He can play as both a centre-back and as a central-defensive midfielder. Which position does he look more comfortable in? Do you believe his future lies in this position?

There is no doubt at all he can play in both positions with ease and he truly looks equally as comfortable in either position, but I’ve always thought that if a player is gifted in midfield then that skill should be utilised to the full instead of being restricted to the centre-back role.

Another reason why I see his long-term future in midfield is his height, or lack of it in this case. In these days of giant players, I believe that top centre-backs have to be at least 6’2” and Fosu-Mensah looks unlikely to reach that height so I believe, and hope, that his long term future lies as a defensive midfielder.

“Hopefully in three to five years we will still have a manager who gives youth a chance. If that’s the case and if he can continue to improve at a good rate and stay clear of major injuries, then I have no doubt at all that he will play for the first-team within that time frame.”

What has impressed you most about Fosu-Mensah’s game this season?

He’s impressed me in many ways. He is such a strong lad with a muscular build that he uses well to hold opposition players off the ball, although that’s just a small part of his game.

He is an excellent passer of the ball and brings team mates into the game very well but his biggest strength is his reading of the game.

The way he has the ability to see what is happening around him and reacts far quicker than most. That means that he can snuff out danger very quickly with his well timed interceptions and tackles. 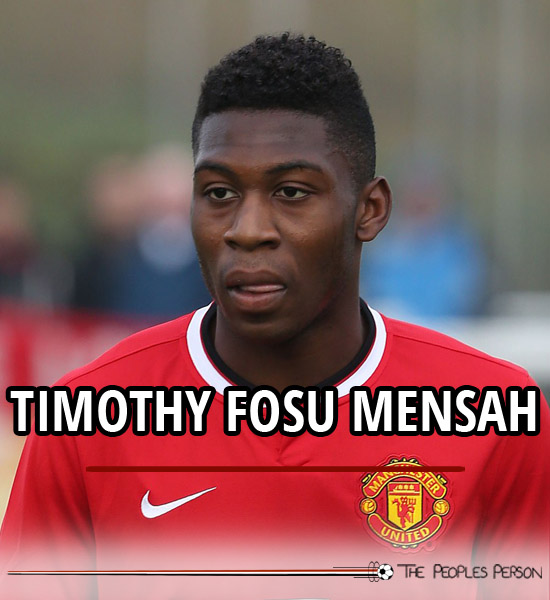 What does he still need to improve on in order to take his game to the next step?

He’s a very long way from the finished article. As I mentioned earlier, he has only been in the team for six months and is still finding his feet in the English game.

Rather than him having to improve in any particular area, I feel its more a case of steady progression in all areas as he works his way through the age groups and as he has already come on leaps and bounds since his arrival, I see no reason why that progression shouldn’t continue.

Many say Fosu-Mensah is ‘Pogba-esque.’ What do you make of this assertion?

To be perfectly honest, I think Pogba and Fosu-Mensah are as different as chalk and cheese.

Pogba is far more skilful and attack-minded than Fosu-Mensah, but he has a definite edge when it comes to tackling and defensive work so with that in mind, I don’t think they can be compared in playing style at all.

Over the years Manchester United have had youngsters such as Morrison, Pogba and Januzaj pass through their ranks. In comparison to these players, where would you rank Fosu-Mensah’s ability and talent?

Once again, it is difficult to compare them as the three players mentioned all played in attacking areas, but where they certainly can be compared is in talent.

Going purely off what I thought the first time I saw them play, I would have to say that Pogba impressed me the most but Fosu-Mensah is up there with them in the way that I thought I was witnessing a star of the future.

Do you believe Fosu-Mensah has what it takes to break into United’s starting XI in the next 3-5 years?

Hopefully in three to five years we will still have a manager who gives youth a chance. If that’s the case and if he can continue to improve at a good rate and stay clear of major injuries, then I have no doubt at all that he will play for the first-team within that time frame.

Ravi is a Features writer for The Peoples Person and contributes with insightful pieces into potential transfer targets as well as some of our younger players.