They say a picture says a thousand words and Pedro’s celebrations (or lack of) following Barcelona’s UEFA Super Cup win last night told their own story.

Pedro had scored the winner in the 115th minute of extra-time after coming off the substitute’s bench.

It was a wonderful moment for the Spaniard but the speculation surrounding his potential move to Manchester United has clearly taken it’s toll.

While the rest of his teammates lifted the trophy, Pedro looked glum, to say the least: 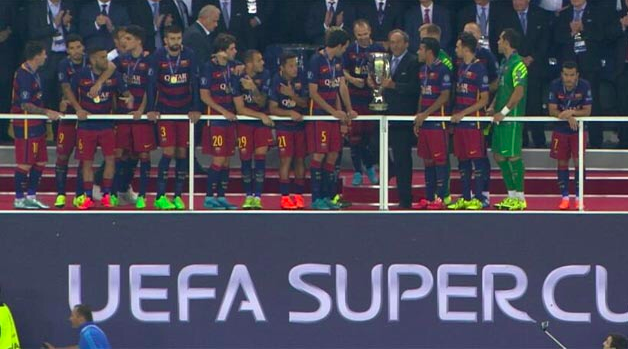 He may have celebrated with his team-mates ten minutes later when the trophy was being paraded around the stadium but this picture speaks 1000 words.

Following the match, Pedro explained he doesn’t want to leave Barcelona but that he may be forced to due to a lack of playing time.

On a personal level, it is sad to see a player so unhappy at the club he loves but he is just extremely unfortunate to be competing with Lionel Messi, Luis Suarez and Neymar. Barcelona’s pain may be United’s gain as Pedro would be a fantastic addition to Louis van Gaal’s side.