Manchester United, who ensured their spot in the Champions League group stages last night with a thumping 4-0 win over Club Brugge, will be high in confidence ahead of their trip to Swansea City in the Premier League this Sunday.

However, Louis van Gaal will be wary of the threat posed by the Welsh club after they beat Man United home and away last season.

Both sides are unbeaten heading into the clash, with Gary Monk’s side showing further signs of improvement after an impressive 2014/15 campaign which saw them finish eighth.

Following United’s imperious second half display against Brugge, van Gaal might be tempted to tweak his lineup in order to reproduce the same attacking display that wreaked havoc on Wednesday. 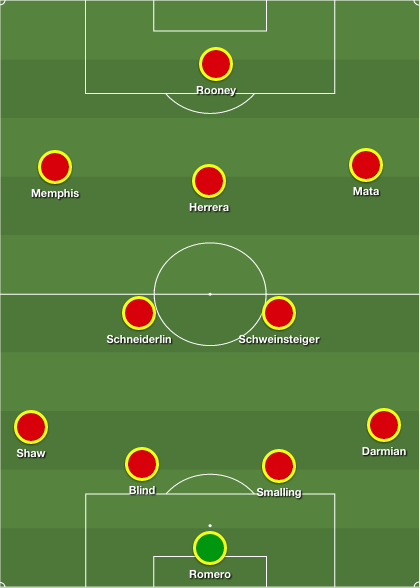 Therefore, Ander Herrera may start in the No.10 role after the Spaniard’s superb performance in that position against Brugge. He looked out of sorts in the first half alongside Michael Carrick in defensive midfield, but was an effervescent force once moved further forward, assisting a goal and scoring one of his own. Adnan Januzaj drops out after a couple of subpar displays.

Bastian Schweinsteiger‘s exceptional second half cameo last night allowed United’s attack to run riot against a flagging Brugge side. His defence splitting pass that set up United’s fourth left supporters in awe, and his supreme manipulation of the ball, which effectively killed off the tie, also merits a starting place for the Deutscher Fußballmeister.