Manchester United have got some great players in the squad but if you had to choose your best 5-a-side team, who would be in yours?

It sounds like an easy decision to make but when you look down the squad list, it’s actually quite difficult but we’ve got a great team. Take a look at see what you think:

Well, you’re going to need a goalkeeper aren’t you? The fact De Gea is comfortable with the ball at his feet really helps as well because on such a small pitch, everybody needs to be comfortable in possession.

The midfield enforcer. His job is simple – make sure United are always in possession. The Frenchman has a great engine, is powerful and strong in the tackle. On a small 5-a-side pitch, he’s the perfect player to make sure you are always in control.

The technical wizard. Every 5-a-side team needs a bit of flair and Mata adds that to ours. The Spaniard won’t be winning the ball back but with no natural striker named in the squad, he’ll need to grab some goals and make sure the attack ticks over.

You can’t have Mata and not have Herrera can you? Plus, Ander is so comfortable in possession that it makes perfect sense to play him in midfield alongside Mata. It’s all about keeping the ball in 5-a-side because it’s such a tight pitch, plus Ander has got a few goals in him as well.

We’ve talked about possession more than Louis van Gaal would in a motivational speech, so instead of talking about keeping the ball, Martial is included to bring his electric pace.

In his first interview with MUTV, Martial labelled himself as rapid and that’s exactly why he’s in the team. Purpose of the play? Get it to Martial and let him run with it in the final third. 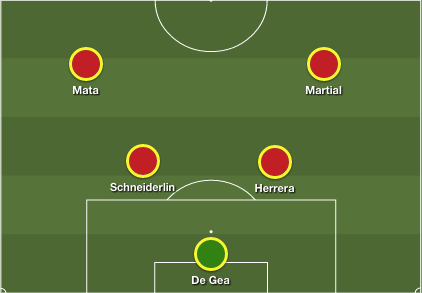 What do you think of our 5-a-side team? Leave yours in the comments below!

Kick Off This Weekend With Goals

Fancy playing a 5-a-side game with your friends? Goals, the world’s largest and most respected operator of 5-a-side pitches, is the place to be. With over 500 pristine, FA accredited pitches at all-weather centres spread across the UK, Goals is the ultimate destination to scrap for bragging rights under beaming floodlights.

Ranging from between £60-£73 per pitch (just over a tenner each), and with leagues and tournaments to join/create, top notch shower and changing facilities, an exclusive app to keep track of progress, and fully licensed BT Sport lounge bars in every location – you and your mates will be strutting the Ronaldinho on (and off) the pitch in no time!

And if that wasn’t enough, how about receiving new gear and beer on the day, and potentially winning prizes from a treasure trove worth £200,000? 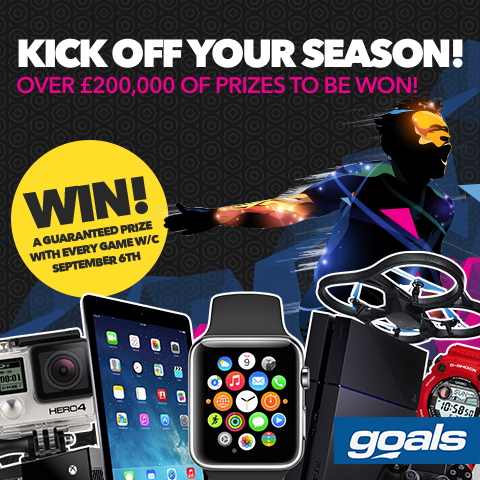 Goals are gearing up to launch their Kick Off Festival week, and teams booking a pitch on or after the 6th September will be given a guaranteed scratch-card on their arrival, with prizes ranging from new shin pads and goalie gloves, to pitchers of beer for celebrations (or wound licking) after the game!

There’s also an automatic entry for those teams into the main prize pot, with an Xbox One, PS4, Go Pro and iWatch just some of the amazing kit up for grabs!


Head over to the Goals website for a quick and easy register, with 10% off all pitches booked online!