BBC’s Garth Crook’s has included two Manchester United players in his Team of the Week, with both Daley Blind and Anthony Martial being selected in the pundit’s weekly best XI.

After a dull first-half, Blind scored a perfectly executed free-kick which put Man United ahead against Liverpool on Saturday, while Martial scored an outstanding solo effort on his home debut to ensure United claimed all three points at Old Trafford.

Crooks described Blind’s performance against Liverpool as ‘extraordinary’ and also praised the ‘dexterity’ Martial showed in netting his first goal for the club.

Seeing United players in the team of the week has become somewhat of a rare occurrence in recent months, so United fans will be thrilled to see two of their players included in this week’s team, especially Martial, who has seemed to fit right in with his new teammates at Old Trafford. 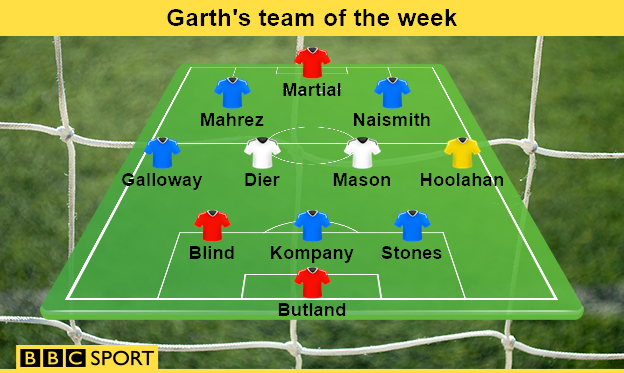 A win against Liverpool is always something to savour but the quality United showed in both attack and defence bodes very well for the rest of the season.

The likes of Daley Blind and Chris Smalling were as solid as ever but if Martial can build on his inspiring debut performance then Louis Van Gaal may just have found a solution to his striking problems.

Regardless of the score, if United can replicate their second-half performance against Liverpool for the rest of the season, then they should have no worries about being in contention for the league title come May.