We’ve been taking a look at predicted XI’s all week but here’s what we think is the strongest team Manchester United can play against Everton on Saturday.

The one glaring omission from the line-up is Wayne Rooney and that’s because right now he simply isn’t playing good enough to warrant place in the team every week and at Goodison Park he has historically played very poor.

As he had to pull out of England’s games during the international break with injury, surely now is the right time for Louis van Gaal to give him a rest? 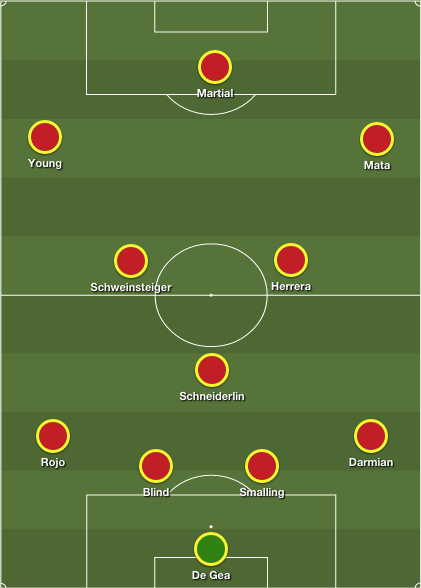 Other changes see Ander Herrera return in midfield and Marcos Rojo in at left-back. We’ve really missed the little Spaniard in midfield, it must be a case of when and not if he is back in the side. As for Rojo, van Gaal is still yet to find his best left-back replacement for Luke Shaw but he considers the Argentinian his only specialist in that position, so I expect him to return there when he is fit.

What do you think about this starting XI? Is it the strongest Man United can put out against Everton?