Luke Shaw might not be out in Moscow with Manchester United in person but local Russian fans have got their own banner to show him the fans are still right behind him.

“Luke Shaw. Be Strong. Be United.” It’s a cracking banner and hopefully one which Shaw sees because it will put a smile on his face.

Right now, Shaw’s speed of recovery is surprising everybody. Not only is he back in Carrington every day working on his rehabilitation, Louis van Gaal revealed a few days ago that Shaw is walking with the aid of a brace. It’s an incredible turnaround so soon after his horror leg break against PSV Eindhoven.

100s of Russian Reds will be in the Utd end tomorrow; the South Russian Reds are bringing this flag… #mufc pic.twitter.com/VA5UMSvIHP

Shaw will be devastated not to be out there in Moscow because his leg break came on his UEFA Champions League debut, a moment he’d have been looking forward to for so long but he’ll have a very positive mental attitude because of how quickly his recovery is going.

Keep up the great work Shaw and know that United fans will be behind you every step of the way.

Update: That didn’t take very long did it? Shaw has seen the banner and shared it with his followers on Twitter. 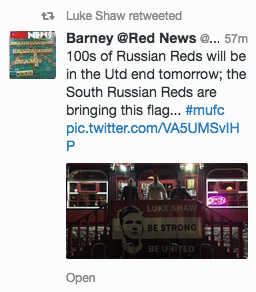