Louis van Gaal will be eager for his Manchester United side to bounce back against Crystal Palace this weekend following the disappointing penalty shootout defeat against Middlesbrough in the Capital One Cup last time out.

Wayne Rooney was awful once again in the clash and van Gaal may bow to pressure and drop his captain for the Palace game.

This would leave Anthony Martial, who has played on the left wing as of late, free to take the No.9 role, where he has looked far more dangerous.

Memphis Depay may have laid down a claim for a starting berth with a good display against Middlesbrough but he was poor and was eventually brought off with 20 minutes of normal time remaining. 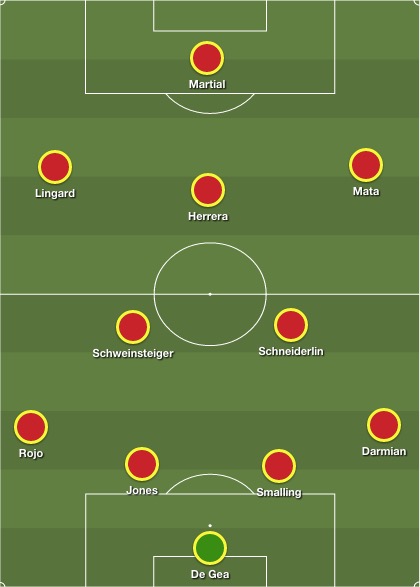 Jesse Lingard has looked far more encouraging in recent weeks and he would be eager to continue his good form against Palace.

Elsewhere, Morgan Schneiderlin and Bastian Schweinsteiger should come back into the starting XI, while Ander Herrera will be hopeful of starting in the No.10 role. Sergio Romero, meanwhile, looked far from comfortable against Middlesbrough despite some good saves. David de Gea will no doubt return against Palace.